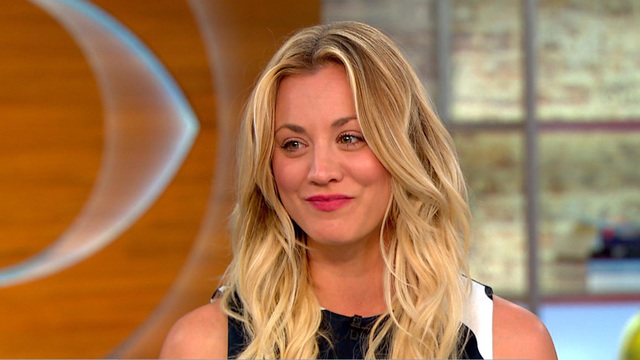 When Kaley Cuoco took on her famous role as Penny on the CBS hit sitcom, "The Big Bang Theory," she said she felt something special from the pilot episode, but would have never predicted its ongoing success.

"We still come in the next morning and we go, 'Did you see the ratings? Did people watch?'" Cuoco told "CBS This Morning" Tuesday. "We are genuinely still so excited and surprised that hasn't changed... I love that about our group."

The the show's ninth season finale airs this Thursday. The actress previewed the comedic family affair that ensues in the episode when Penny and her husband Leonard hold a second wedding. Guest stars Judd Hirsch and Christine Baranski join the original cast as Leonard's recently divorced parents.

"It kind of leaves... with a little bit of a 'uh-oh,'" Cuoco teased. "And there's a big dinner scene... that is hilarious. I was laughing so hard. I mean, if you see me, I'm laughing the entire time."

But the actress has gone through a rough patch in her personal life. After 21 months of marriage, Cuoco finalized her divorce from tennis player Ryan Sweeting.

"I'm not ashamed of anything that happened. I fall in love really hard... that person is it for me and I love hard, and when it's over, it's over," Cuoco said. "I wouldn't call it a mistake, it just is what happened in my life and so I'm excited to see what the future holds... and now I have to say I'm happier than I've ever been."

In her "other life," Cuoco is an avid equestrian rider. She showed off her impressive skills with fans on social media, and even competed in a local horse jumping event in Los Angeles. That "horse connection" is what drew her to her new beau, pro equestrian Karl Cook. The actress was shy to talk about her boyfriend, but said he was "special."

"The Big Bang Theory" has been renewed for a 10th season, but show runner Steve Molaro hinted at the possibility that it may be its last. Cuoco immediately dismissed the idea.

"I don't want it to be the last. I can safely say no one wants it to be the last... We got a good thing going and we genuinely like each other and we have a really good job and we want to stay here for, I want to say, many more years," Cuoco said.