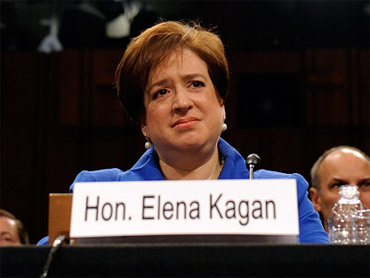 Supreme Court nominee Elena Kagan pledged at her Senate confirmation hearing Monday to show the "evenhandedness and impartiality" the Constitution demands if she is confirmed, and to offer proper deference to Congress and the laws it makes.

The court must ensure that "our government never oversteps its proper bounds or violates the rights of individuals," she said before a rapt Judiciary Committee and a nationwide television audience on the opening day of her hearing. "But the court must also recognize the limits on itself and respect the choices made by the American people." (Read excerpts.)

The 50-year-old solicitor general and former Harvard Law School dean appeared on track for confirmation before the high court opens a new term in October as she delivered a brief statement at the end of a day of senatorial speechmaking.

Before Kagan spoke, senators gave opening statemnts that illustrated the degree to which Republicans feel emboldened by what they see as a weakened President Obama and sense that support for the nominee has dropped, CBS News Chief Legal Correspondent Jan Crawford reports.

Kagan stopped by the Oval Office of the White House to receive best wishes from President Barack Obama on her way to the hearing. A few moments and little more than a mile distant, she strode with a smile into the committee room and took her place at the witness table - where senatorial ritual then required her to sit for hours while lawmakers delivered prepared speeches from an elevated dais across the room.

Finally, at mid-afternoon, it was her turn. "I will listen hard, to every party before the court and to each of my colleagues. I will work hard. And I will do my best to consider every case impartially, modestly, with commitment to principle and in accordance with law," she said.

Kagan faces hours of questioning, both friendly and otherwise, when the panel meets on Tuesday, a grilling that she has spent hours preparing for under the tutelage of White House advisers.

"I believe the fair-minded people will find her philosophy well within the legal mainstream," said Sen. Patrick Leahy, D-Vt., the panel's chairman. "I welcome questions but urge senators on both sides to be fair. No one should presume that this intelligent woman who has excelled during every part of her varied and distinguished career, lacks independence."

But the committee's senior Republican signaled that Kagan can expect tough questioning. "It's not a coronation but a confirmation process," said Sen. Jeff Sessions of Alabama. He said she had "less real legal experience of any nominee in at least 50 years." And he said her decision to bar military recruiters from Harvard Law School's career services office was in violation of the law - a legal conclusion disputed by the White House.

Leahy and Sessions both said they hoped Kagan would answer questions candidly, although the chairman also cautioned, "No senator should seek to impose an ideological litmus test to secure promises of specific outcomes in cases coming before the Supreme Court."

Judging by recent confirmation history, there was little chance that Kagan would run afoul of that admonition. In the past quarter century, most nominees have pledged fealty to the Constitution and legal precedent - and little else - in their efforts to win approval.

While Kagan's confirmation looks likely, Republicans have been careful not to rule out a filibuster of the nominee, Crawford notes. They are mindful that Obama once voted to hold up President Bush's nominees, including Justice Samuel Alito.

Obama nominated Kagan to succeed retiring Justice John Paul Stevens, a frequent dissenter in a string of 5-4 rulings handed down by a conservative majority under Chief Justice John Roberts.

Strikingly there were several such rulings in the hours before the hearing opened. In one, the court struck down part of an anti-fraud law enacted in 2002 in response to scandals involving Enron and other corporations.

In another, a 5-4 majority said the right to bear arms can't be limited by state or local laws any more than by federal legislation.

Kagan's opening statement touched on her parents' growing up in immigrant communities. She also praised Stevens, expressed a debt of gratitude to Justices Sandra Day O'Connor and Ruth Bader Ginsburg for living "pioneering lives" and described the current members of the court in glowing terms.

She also recalled a clerkship nearly a quarter-century ago for Justice Thurgood Marshall, who she said viewed the court as the part of government most open to everyone.

"The idea is engraved on the very face of the Supreme Court building: Equal Justice Under Law," she said. "What this commands of judges is evenhandedness and impartiality. What it promises is nothing less than a fair shake for every American."

Obama has said he tapped Kagan for her keen intellect, her leadership skills and her ability to build consensus on a deeply divided Court of four conservatives, four liberals and swing justice Anthony Kennedy in the middle.

One Republican on the committee, Sen. Lindsey Graham of South Carolina, said he could say with certainty that Kagan's nomination wouldn't change the balance of power on the court. But in a reference to Obama, he added, "I hope people will understand that elections do matter."

A handful of protesters gathered outside the Senate Hart Office Building across the street from the Capitol, some opposing Kagan's nomination, others expressing unhappiness that Republicans haven't done more to block it.

By midmorning about 200 people had claimed tickets for seats in the hearing room, the first ones arriving as early as 6:30 to line up in the heat. By the time Kagan spoke, at mid-afternoon, the lined had dwindled considerably - scarcely a half-dozen would-be spectators were waiting for a chance to view the proceedings.

"The Supreme Court is a wondrous institution. But the time I spent in the other branches of government remind me that it must also be a modest one," Kagan said in her remarks, but did not elaborate on that point or on her statement that she would accord proper deference to Congress if confirmed.

Numerous Democrats complained that under Chief Justice John Roberts the court has strayed far beyond what Congress intended when it wrote laws regarding campaign finance, workplace rights and other issues. In a similar vein, Republicans argue that Obama is determined to turn the court in a more liberal direction.

Several Republicans expressed concerns Kagan would become a judicial activist along the lines of Marshall. Confirmed in 1967 as the first black justice in history, he was a civil rights lawyer best known in his earlier career for successfully arguing the case in which the Supreme Court ruled that segregation of public schools along racial lines was unconstitutional. As a young lawyer, Kagan was one of his clerks at the high court.

Earlier in the day, Leahy predicted that Kagan would be cleared with votes to spare. He brushed off GOP questions about her lack of judicial experience, saying there had been many successful justices who had no previous bench time. He cited Earl Warren, Hugo Black and Robert Jackson.

Sessions said he hoped there wouldn't be a filibuster, but said he was concerned that Kagan may be "outside the mainstream" of legal thinking. He said Republicans have serious questions to resolve, including whether she would be too driven by her political views if she were to take a place on the high court.

The GOP was set to grill Kagan on controversial issues from guns to abortion to campaign finance, arguing that she'd bring liberal politics and an antimilitary bias to the job of a justice.

One of the issues Republicans have already focused on was her decision, while at Harvard, to bar recruiters from the career services office because the military's policy on homosexuality violated the school's nondiscrimination rules. She was also strongly critical of the "don't ask, don't tell" policy.

The Pentagon said Kagan's stance made Harvard ineligible for federal funding under a law that required schools to give military recruiters the same access as other employers, a different interpretation from Sessions' statement that she had violated the law.

Kagan's swearing-in would mark the first time three women would be on the court at the same time. Justices Ruth Bader Ginsburg and Sotomayor are the other two.