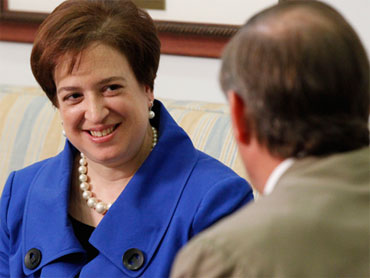 Elena Kagan will be making the argument of her life on Monday when she faces a Senate panel on her confirmation to the Supreme Court.

Kagan's chances are bright as she heads into a marathon week of high-pressure vetting before the Senate Judiciary Committee, pressing to portray herself as a mainstream, impartial addition to the court. She's set to break weeks of public silence Monday afternoon in sworn testimony before the panel.

CBS News chief legal analyst Jan Crawford says Kagan looked like a shoe-in when she was first nominated, but getting her a place on the nation's high court now promises to be a battle.

Democrats have more than enough votes to confirm her. Republicans have shown no inclination to try to block such a vote, but Republican Sen. Jeff Sessions (Ala.), the ranking GOP member of the Senate Judiciary Committee, told CBS Face The Nation host, Bob Schieffer, that a filibuster of Kagan is not off the table.

"I think the first thing we need to decide is, is she committed to the rule of law even if she may not like the law?" Sessions said. "Will she as a judge subordinate herself to the Constitution and keep her political views at bay? And then secondly, if things come out to indicate she's so far outside the mainstream, it's conceivable a filibuster might occur."

Crawford says Democrats will try to highlight Kagan's career and academic prowess as proof she will be an intellectual heavyweight and consensus builder, but their rivals will seize on her lack of judging experience and seek to portray her as a liberal activist.

Leahy even quipped that the party lines have already been drawn before the hearings commence Monday.

"It's reached the point that if [Obama] had nominated Moses the law giver, some would have said we can't have him because among other things he hasn't produced a birth certificate," he told Schieffer.

The GOP is set to grill Kagan on hot-button issues from guns to abortion to campaign finance, arguing that she'd bring liberal politics and an antimilitary bias to the job of a justice.

"She'll have to convince me that all of this liberalism that she's lived with all her life can be put in a proper place and when she gets to be a judge she'll be left of center but within the mainstream of judging," Sen. Lindsey Graham, R-S.C., said on "Fox News Sunday."

For the second summer in a row, a woman chosen by President Obama is appearing before the Judiciary Committee for televised hearings in a cavernous room on Capitol Hill, where the questioning by senators is seldom polite but nominees rarely if ever go off-script.

If confirmed, the 50-year-old Kagan would be the fourth woman to join the Supreme Court, and her swearing-in would mark the first time three women have presided there at the same time.

The White House and Senate Democrats are painting Kagan, the first woman to be dean of Harvard Law School or to hold the job of solicitor general, as a pioneering figure and brilliant legal mind who can build consensus on the polarized court.

Later this week, they'll call conservatives, including two who served in the administration of George W. Bush - Harvard Law School professor Jack Goldsmith and former Solicitor General Greg Garre - in a bid to dispel GOP charges that she's a liberal rubber-stamp for Obama.

The GOP has worked to brand her a liberal extremist who betrayed the nation during wartime, and plans to try to bolster its case by spotlighting Kagan's dispute with the Pentagon over military recruiting at Harvard and the policy against openly gay soldiers. Its witnesses later this week include three veterans.

While at Harvard, Kagan barred recruiters from the career services office because the military's policy on homosexuality violated the school's nondiscrimination rules. She was also strongly critical of the "don't ask, don't tell" policy.

The Pentagon said Kagan's stance made Harvard ineligible for federal funding under a law that required schools to give military recruiters the same access as other employers.

Obama, while not present at the hearings, will nonetheless be a key theme for Republicans, who regard Kagan's nomination as a symptom of what they characterize as the president's attempts to remake the judiciary with judges who are willing to twist the law to achieve their agendas.

"President Obama wants justices who indulge their own policy preferences. There's every reason to believe that he's found that with Elena Kagan," said Ed Whelan of the conservative Ethics and Public Policy Center.

The fact that Republicans lack the votes to defeat Kagan's nomination "doesn't make the hearing unimportant," Whelan said. "This is an opportunity for Republicans and critics of the administration and of Elena Kagan to make clear to the American people what this administration is doing."

The White House has carefully choreographed Kagan's confirmation process, and knows that much of the public is just now learning who she is.

Presidential adviser David Axelrod joked with reporters Friday about the extraordinary string of major developments - the abrupt dismissal of Gen. Stanley McChrystal and the Gulf oil spill chief among them - occupying Obama's attention in recent weeks, all of which have helped push Kagan off the front pages and out of the public eye.

"Because things have been rather dull in Washington, we've scheduled these Supreme Court hearings just to enliven the festivities," Axelrod quipped.