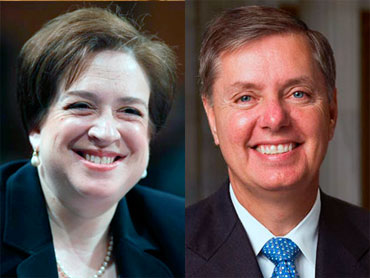 If there's one thing that both Democrats and Republicans have agreed on during Supreme Court nominee Elena Kagan's Senate confirmation hearings, it's that the courts should avoid "judicial activism."

Sen. Lindsey Graham (R-S.C.) noted as much today, in the third day of the hearings.

"An activist judge is something none of us like, apparently," Graham said. "Nobody on that side likes it, and nobody on our side likes it."

Indeed, Republicans this week criticized Kagan for naming so-called "judicial activists," such as former Supreme Court Justice Thurgood Marshall, for whom Kagan clerked, as some of her professional heroes. Sen. Jeff Sessions (R-Ala.), the top Republican on the committee, said on Mondaythat Kagan "associated herself with well-known activist judges who have used their power to redefine the meaning of our Constitution and have the result of advancing that judge's preferred social policies."

Democrats, meanwhile, blasted the current Supreme Court for its own "judicial activism" in favor of corporations over citizens -- citing the Citizens United case. Sen. Dick Durbin (D-Ill.) said, "If that isn't judicial activism, what is?"

Graham noted today, "It seems to be an activist judge is somebody that rules the way we don't like."

He said he would like a more sophisticated definition of an "activist judge" and asked Kagan for hers.

Kagan said an "activist judge" would be a judge that fails to take three principles to heart: Deference to the right of the political branches of government to make policy, because "that's who ought to be making policy;" respect for precedent; and the principle of deciding cases narrowly, "avoiding constitutional questions, if one can."

Graham took issue with his Republican colleagues' characterization of Marshall as an "activist."

"Justice Marshall will go down in history as one of the icons of the law and one of the greatest justices in the history of the country, even though I disagreed with a lot of his rulings," he said. "That's the way it should be. And if our people say that's activism, so be it."

Pressed by Graham to name anyone she would call an "activist judge," Kagan said she didn't want to make any comments she would regret.

"Well, here's what I regret," Graham said. "I regret all of us throwing these terms around without any definition to it other than we just, you know, we believe the way they judge is just not the right way."

Graham cited former Israeli Judge Barak, whom Kagan has called one of her heroes, as an example of an "activist judge." He read from a statement in which Barak said a court may change a law so that it "suits new social needs."

"What the hell does that mean?" Graham asked.

Kagan gave an answer Graham said he found reassuring: "I think it means that the court can change a statute, and I think that that's wrong," Kagan said.