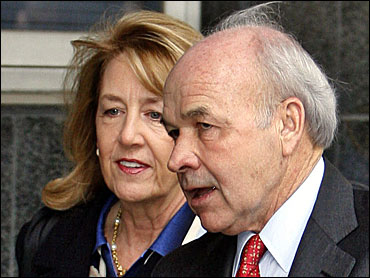 Eight women and four men were selected as jurors Monday for the trial of former Enron Corp. chiefs Kenneth Lay and Jeffrey Skilling, who stand accused in perhaps the premier criminal case to emerge from corporate scandals that began when the energy giant went under in 2001.

The jurors, including an additional two women and two men as alternates, were picked after just one day of jury selection in Houston federal court. Opening statements were scheduled for Tuesday.

While thousands of Houston-area residents were laid off in the flame-out of the energy giant, U.S. District Judge Sim Lake made clear to the pool of almost 100 potential jurors assembled Monday morning that the jury box was not the place to avenge those who lost jobs or investments.

"We are not looking for people who want to right a wrong or provide remedies for those who suffered in the collapse of Enron," Lake said.

Observing the trial, CBS News legal analyst Andrew Cohen writes, "It was an extraordinary quick selection process that is sure to generate lingering questions of fairness no matter what ultimately happens at trial."

Jury selection occurred just blocks from the building that was once a nerve center for Enron, a Wall Street darling in the late 1990s that was considered a new-economy maverick with a high-flying stock price and a now-iconic tilted "E" logo.

But the company's fortunes — not to mention tens of thousands of jobs and billions of dollars in investments — were shattered in 2001, as a series of complex entities designed to hide Enron debt came to light and the company went bankrupt.

A federal indictment accuses Lay, 63, and Skilling, 52, of orchestrating a tangled scheme of accounting tricks designed to hide the debt, keep Enron's credit rating high and maintain a healthy stock price, enriching themselves in the process.

The Enron collapse touched off a series of corporate scandals, and in the ensuing years the government has won convictions against Martha Stewart and other executives from companies such as WorldCom Inc. and Adelphia Communications Corp. A rare exception was HealthSouth Corp. founder Richard Scrushy, who was acquitted on fraud charges last year, even after five former finance chiefs implicated him in an earnings-boosting scheme.

CBS News correspondent Lee Cowan reports the tarnished brass arrived at the courthouse looking worried about finding 16 people in their hometown who don't hate them to the core.

The mere mention in Houston of the Enron collapse raises the hackles of a lot of people. Angie Laurio worked for Enron for 28 years before being laid off. She says she saw $500,000 worth of retirement investments vanish almost overnight.

"Their day of reckoning is coming soon, thank the Lord," said Laurio.

Skilling's defense attorney Daniel Petrocelli has tried twice to get the trial moved outside of Houston. He says, "If people have a deep seeded bias and they've harbored that bias for the last four years, it's awfully difficult in the course of a trail and even a lengthy trial, to undo their state of mind."

Judge Lake refused both requests, convinced he can find a jury that is not out to seek vengeance or offer their own version of Texas justice.

Lake acknowledged the heavy publicity in the Houston area and said he did not expect jurors to "blot out" what they had seen and read, but urged them to decide the case based only on the evidence.

He told the jury pool the trial could take as long as four months. Among the expected witnesses is Andrew Fastow, Enron's former chief financial officer, who pleaded guilty to conspiracy charges in 2004 and faces up to 10 years in prison once he is finished cooperating with federal prosecutors. Fifteen other former Enron executives have pleaded guilty in the accounting scandal.

The first prosecution witness was expected to be Mark Koenig, former head of Enron's investor relations department, who worked with Lay and Skilling on quarterly conference calls with analysts. He pleaded guilty in August 2004 to aiding and abetting securities fraud. Earlier this month he revised his plea agreement, attributing to Skilling a statement that Koenig originally said he himself made on a 2001 call. The statement was designed to mislead analysts about why Enron folded its money-losing retail energy unit into the company's profitable trading unit.