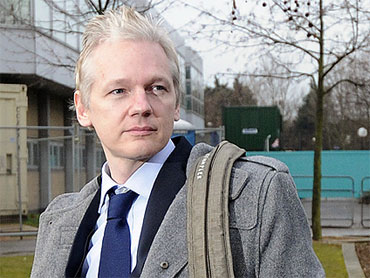 LONDON - WikiLeaks founder Julian Assange was back in court Monday for a showdown with Swedish authorities to fight an extradition bid over sex crimes allegations.

Assange lawyer Geoffrey Robertson said his client was fighting extradition because such trials in Sweden are usually held in secret. A trial behind closed doors would be "a flagrant denial of justice ... blatantly unfair, not only by British standards but by European standards and indeed by international standards," he said.

"You cannot have a fair trial where the press and the public are excluded from the court," Robertson said.

Assange is accused of sexual misconduct by two women he met during a visit to Stockholm last year. Defense lawyers argue that he should not be extradited because he has not been charged with a crime, because of flaws in Swedish prosecutors' case - and because a ticket to Sweden could eventually land him in Guantanamo Bay or on U.S. death row.

American officials are trying to build a criminal case against the secret-spilling site, which has angered Washington by publishing a trove of leaked diplomatic cables and secret U.S. military files. Assange's lawyers claim the Swedish prosecution is linked to the leaks and politically motivated.

Assange's legal team claim "there is a real risk that, if extradited to Sweden, the U.S. will seek his extradition and/or illegal rendition to the USA, where there will be a real risk of him being detained at Guantanamo Bay or elsewhere."

"There is a real risk that he could be made subject to the death penalty" if sent to the United States, Assange's lawyers contend. Under European law, suspects cannot be extradited to jurisdictions where they may face execution.

The prosecution dismissed those concerns Monday morning as being based on a "hypothetical assumption".

Prosecutor Claire Montgomery said if there was any real threat of degrading treatment or an unfair trial, Sweden would respond in accordance with European human rights law. She called the defense's worries "unfounded."

Montgomery opened her arguments by dismissing several key planks of the defense. She said Marianne Ny is a public prosecutor, dismissing defense claims that she is not authorized to issue a European Arrest Warrant.

She also said the rape allegation was an extraditable offense even under Sweden's broad definition of the crime. Assange's lawyers say he cannot be extradited because he has not been charged with a crime in Sweden and is only wanted for questioning - and that the allegation is not rape as understood under European and English law.

"The Swedish offense of rape contains the core element of rape ... the deliberate violation of a woman's sexual integrity through penetration," she said.

Nils Rekke, head of the legal department at the Swedish prosecutor's office in Stockholm, said Assange would be protected from transfer to the U.S. by strict European rules.

"If Assange was handed over to Sweden in accordance with the European Arrest Warrant, Sweden cannot do as Sweden likes after that," he said. "If there were any questions of an extradition approach from the U.S., then Sweden would have to get an approval from the United Kingdom."

Assange's lawyers also battled extradition Monday on the ground that he has not been charged with a crime in Sweden and is only wanted for questioning.

They argue that "it is a well-established principle of extradition law ... that mere suspicion should not found a request for extradition."

Robertson, Assange's attorney, told the court Monday that his client had been "ready and willing" to answer questions via video link for weeks, rendering the request for extradition unnecessary.

WikiLeaks sparked an international uproar last year when it published a secret helicopter video showing a U.S. attack that killed two Reuters journalists in Baghdad. It went on to release hundreds of thousands of secret U.S. military files on the wars in Iraq and Afghanistan, and it later began publishing classified U.S. diplomatic cables whose revelations angered and embarrassed the U.S. and its allies.

The furor made Assange, 39, a global celebrity. The nomadic Australian was arrested in London in December after Sweden issued a warrant on rape and molestation accusations.

Released on bail on condition he live - under curfew and electronically tagged - at a supporter's country mansion in eastern England, Assange has managed to conduct multiple media interviews, sign a reported $1.5 million deal for a memoir, and pose for a magazine Christmas photo shoot dressed as Santa Claus.

He drew a large media scrum at a brief court appearance in London last month, where he vowed to step up the leak of a quarter million classified U.S. diplomatic cables.

The full extradition hearing should shed light on the contested events of Assange's trip to Sweden, where WikiLeaks' data are stored on servers at a secure center tunneled into a rocky Stockholm hillside. Two Swedish women say they met Assange when he visited the country and separately had sex with him, initially by consent.

In police documents leaked on the Internet, one of the women told officers she woke up as Assange was having sex with her, but let him continue even though she knew he wasn't wearing a condom. Having sex with a sleeping person can be considered rape in Sweden.

Assange is also accused of sexual molestation and unlawful coercion against the second woman. The leaked documents show she accuses him of deliberately damaging a condom during consensual sex, which he denies.

The picture is more confused by the fact that one Stockholm prosecutor threw out the rape case, before a more senior prosecutor later reinstated it and asked for Assange's extradition from Britain so she could question him.

Assange's lawyers argue that amid the confusion, the European arrest warrant was improperly issued. They allege Assange "has been the victim of a pattern of illegal and/or corrupt behavior by the Swedish prosecuting authorities," who leaked his name to the media, rejected his requests to be interviewed from London, and failed to make the evidence against him available in English.

They also say the accusations against Assange would not constitute a crime in Britain, and complain they have not been given access to text messages and tweets by the two women which allegedly undermine their claims. They say text messages exchanged by the claimants "speak of revenge and of the opportunity to make lots of money."

Whatever happens in court this week, Assange's long legal saga - and his stay in the tranquil Norfolk countryside - is far from over. The extradition hearing is due to end Tuesday, but Judge Howard Riddle is likely to take several weeks to consider his ruling - which can be appealed by either side.

Assange, meanwhile, may be tiring of his nomadic life. On Friday he told a meeting in Melbourne by video link that Australian Prime Minister Julia Gillard "should be taking active steps to bring me home."