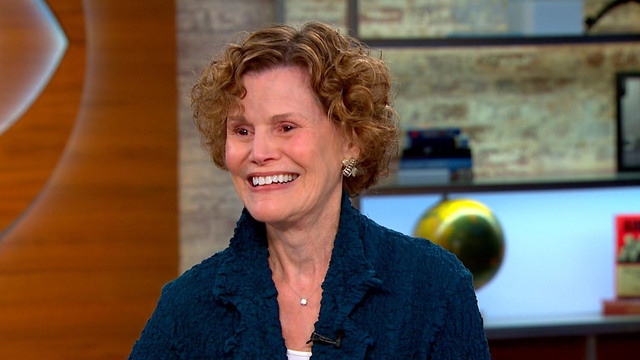 Judy Blume achieved worldwide acclaim for her coming-of-age classics like "Are You There God? It's Me Margaret" and "Tales of a Fourth Grade Nothing," but her work has also tackled adult themes. In her latest novel, "In the Unlikely Event," Blume uses her own life growing up in Elizabeth, New Jersey, as inspiration.

The new book tells the story of three families who are all connected to three plane crashes that happened over a 58-day span during the early 1950s. The plane crashes are not fiction but the characters are, and Blume spent five months researching the history she needed to create them before spending five years on the book.

"It was an incredible experience," Blume said on "CBS This Morning" Tuesday.

Since starting her career in the 1970s, Blume has tackled many taboo subjects that weren't always tolerated by parents or schools, but she always had the love and support of the young people they were written for. Blume said she was never inspired to write about uncomfortable subjects specifically, but wanted to write based on her own experiences as a pre-adolescent.

"I vowed when I started to write, I'm going to be honest and tell it the way I know it," Blume said. "I was writing about a kid, and a kid of a certain age."

Her fan base has always had an emotional and unwavering attachment to her work, which has left Blume feeling incredibly grateful.

"I cry with them because it's very emotional," Blume said. "I always say to them the reason you feel this way is because I represent your childhood, I bring back your childhood."

"In the Unlikely Event" is available now.