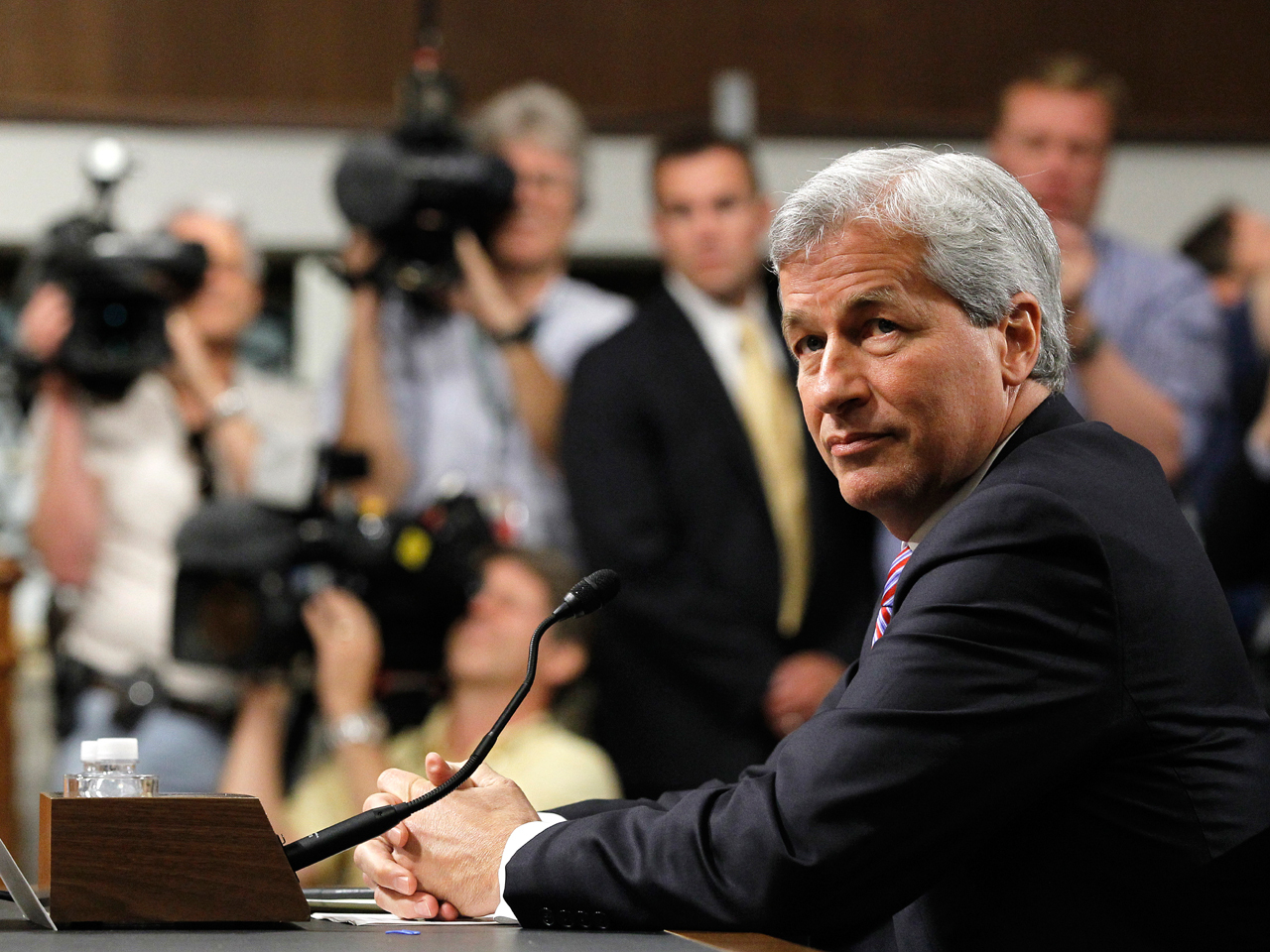 (AP) WASHINGTON - JPMorgan Chase CEO Jamie Dimon told Congress on Wednesday that senior bank executives responsible for a $2 billion trading loss will probably have some of their pay taken back by the company.

"It's likely that there will be clawbacks," Dimon told the Senate Banking Committee.

Under bank policy, Dimon said, stock and bonuses can be recovered from executives, even for exercising bad judgment. The policy has never been invoked, he said.

The start of the hearing was delayed by demonstrators in the room who shouted about stopping foreclosures. Another demonstrator shouted, "Jamie Dimon's a crook." At least a dozen people were escorted from the hearing room.

Dimon appeared serene during the outbursts, which lasted several minutes. At another point before the questioning began, he gave a broad smile.

Dimon to apologize before Congress for $2B trading loss
JPMorgan shareholders back Dimon
JPMorgan Chase: London whale swallows $2B

Dimon contended that the trading loss, disclosed May 10 in a surprise conference call with reporters and banking analysts, were meant to hedge risk to the company and to protect in case "things got really bad."

Sen. Charles Schumer, D-N.Y., told Dimon that "the question that bothers most people" is whether the trading loss could happen at a weaker bank with less of a cash cushion to protect itself.

JPMorgan's trading loss has heightened concerns that the biggest banks still pose risks to the U.S. financial system, less than four years after the financial crisis in the fall of 2008.

The so-called Volcker rule, which goes into effect in July, will prevent banks from making certain trades for their own profit. Banks won an exemption to trade to protect their broad portfolios, as Dimon has said JPMorgan was doing in this case.

Dimon told the committee, however, that "I have a hard time distinguishing it."

A key regulator of JPMorgan, Thomas Curry, the U.S. comptroller of the currency, suggested last week that the bank lacked strong controls to contain risk in its investment operations.

And The Wall Street Journal reported Tuesday that some senior JPMorgan executives, including the chief financial officer and chief risk officer, were told about risky trading in London two years before the losses came to light.

Dimon himself knew of some of the trades and sometimes spoke with the traders involved, the Journal reported, citing unnamed people familiar with the matter.

The banking committee's chairman, Sen. Tim Johnson, D-S.D., cited "an out-of-control trading strategy with little to no risk controls" at JPMorgan, according to portions of his opening statement for the hearing released Tuesday.

"So what went wrong?" Johnson was to ask.

The Securities and Exchange Commission is reviewing what JPMorgan told investors about its finances and the risks it took before the loss.

In April, in a conference call with analysts, Dimon had dismissed concerns about the bank's trading, calling them a "tempest in a teapot." Later, adopting a more conciliatory stance, he conceded that he'd been "dead wrong" to minimize those concerns.

Dimon has called the losses "a black mark" for the bank. He confessed to a "flawed, complex, poorly reviewed, poorly executed and poorly monitored" trading strategy that allowed the losses to occur.

Senators will want to know what Dimon knew at the time he dismissed the issue in April.

Dimon, the grandson of a Greek immigrant and son of a stockbroker, is no stranger to Washington. His reputation for cost-cutting and his perceived mastery of risk have given him an audience at the Treasury Department, White House and Congress, particularly during the crisis. More than other major Wall Street banks, JPMorgan weathered the 2008 financial crisis with few scars.

This time, Dimon will be under a harsher spotlight.

Since the crisis, Dimon has been an outspoken voice against stricter financial regulation. He has complained that lawmakers and regulators have gone too far in an overhaul of the financial system and might be slowing the economic recovery.

In particular, Dimon has criticized the so-called Volcker rule, which would bar banks from making certain trades for their own profit.

Thanks to lobbying by Dimon and other Wall Street bankers, the banks won an exemption in the rule: It would let them make such trades to hedge not only the risks of individual investments but also the risks of a broader investment portfolio.

Dimon has said the rule would not have prevented the trading that led to JPMorgan's losses. He says the trading in credit derivatives was designed to hedge against financial risks, not to make a profit for the bank.

The Volcker rule goes into effect next month, but banks don't have to fully meet its requirements for two more years.