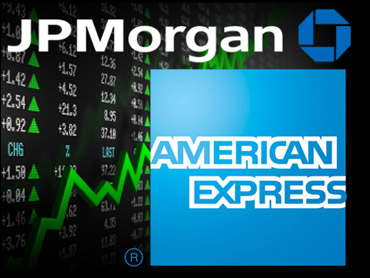 JPMorgan Chase & Co. and American Express Co. are the latest recipients of federal bailout funds to launch public stock offerings aimed at proving to the Treasury Department that they can raise capital on their own and don't need to keep taxpayer aid.

JPMorgan said Monday it plans to raise $5 billion through a common stock offering as it seeks to repay the $25 billion that the bank was awarded under the government's Troubled Asset Relief Program. American Express also said Monday it will sell $500 million in stock in a public offering to help pay back part of the $3.4 billion in TARP funds it has received.

Banks have chafed against rules imposed by Congress after they took the bailout money, including limits on executive compensation.

The Federal Reserve on Monday laid out rules for how the 19 largest financial institutions can wind down their reliance on government support. The banks, which have assets of more than $100 billion, were subjected to "stress tests" to determine their financial strength. They have received a total of $228.6 billion from Treasury's $700 billion financial bailout package.

The test results, released last month, showed 10 of the banks had to raise a total of $75 billion in new capital to withstand possible future losses. Those banks have since been scrambling to raise the money through stock offerings and other financial moves. Banks that were not deemed to need more capital and which want to repay bailout funds must prove they can raise money without relying on guarantees against losses provided by the Federal Deposit Insurance Corp.

In order to repay the money, banks had to apply to their primary regulators for permission. Successful applications were forwarded to Treasury for final approval, with the first round of approvals expected next week. JPMorgan, Goldman Sachs Group Inc., Morgan Stanley, American Express and Bank of New York Mellon all have applied to repay the more than $50 billion they have received in total.

JPMorgan said Monday it believes that once it raises the $5 billion, it will have satisfied government criteria for fully redeeming TARP's preferred capital, although it hasn't yet won government approval to repay the full $25 billion. The bank said it expects to satisfy criteria to fully repay preferred capital "before the end of June."

Last month BB&T, U.S. Bancorp, Capital One Financial Corp. and Bank of New York Mellon, said they were raising capital in order to repay TARP. Those banks passed the government's stress tests with no capital requirements, so they and other banks with sufficient capital, such as JPMorgan and Goldman Sachs, are likely to get approval soon to return TARP, analysts say.

But the Federal Reserve also laid out other conditions for repayment.

The Fed said the large banks must persuade regulators that they will be able to continue lending to creditworthy borrowers and that they can maintain the minimum capital levels required under the stress tests. The banks also must prove they will be able to meet funding obligations to business partners while "reducing reliance on government capital" and the FDIC guarantee.

The Fed's rules are part of an effort to wind down all government support of banks; not just from the Treasury bailout program, but also from other subsidies.

The move to link repayment to less reliance on other subsidies reflects a "quid pro quo" between banks and regulators, said Douglas Elliott, of the Brookings Institution.

"It would make sense they would tie the two together and basically say, 'If you want to pay us back, we'll let you, but you've got to show us you're strong enough to not need additional assistance through any of these vehicles."