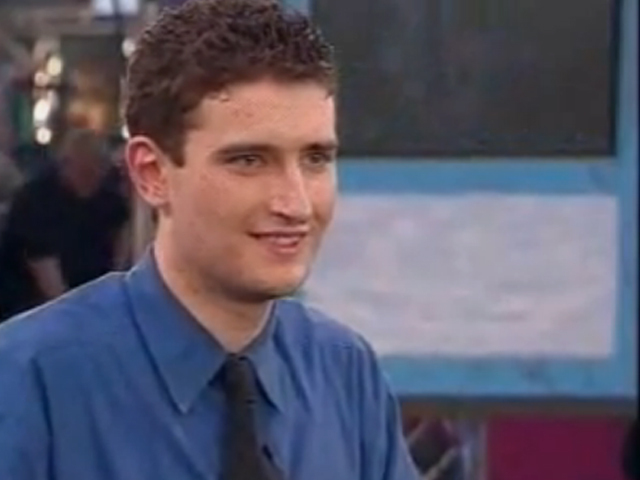 (CBS) - Monday was a crazy day on the East Coast. We were recovering from an earthquake and a hurricane. Many of us couldn't make it into the office on time or at all. It was also the day that Gizmodo intern Alyssa Bereznak posted an article trashing a guy she met on dating site OKCupid.

He seemed like a nice fellow, except for a few things that did not fit her taste. Top of the list being his accomplishments as a world champion of the collectible card game Magic: The Gathering. Instead of quietly judging him and moving on with her life, she decided to write a post about him and reveal his name on tech blog Gizmodo, which garners 1.8 million unique visitors.

Jon Finkel thought he left his life as a world champion behind him. While he never hid the fact he was a Magic hero of sorts, it was something that happened 10 years ago. He didn't feel it necessary to attach the world champion title to his current accomplishments, which includes being a partner at a hedge fund in New Jersey, FYI.

When we recounted her post with anger (that's right, we were peeved), it was the end of the day and it seemed like the story would just go away overnight. But, we weren't the only ones who thought Bereznak crossed the line by linking to Finkel's personal information and stepped into cyberbullying territory. The story did not go away. By Tuesday, it had made its rounds, and publications like Forbes and the Washington Post reported it, too.

The publicity prompted the popular link sharing website Reddit to request that Finkel do an Ask Me Anything (AMA) post, where users ask questions and the subject answers as many as they desire. You'll find the highlights from his AMA at the end of this post.

We reached out to Finkel and asked him a few questions of our own. He was getting ready for a tournament and was kind enough to give us answers via email.

Our exclusive Q&A with Jon Finkel

CN: We noticed that Alyssa's internship ended. If she was fired over the post, do you think it was a fair move by Gizmodo?

JF: I think it's unlikely. It's the end of the summer so a lot of internships are ending now. I think she alluded to something of the sort when we talked, but I couldn't say for sure.

CN: We know you felt your privacy was violated. Are there any tips that you'd like to pass on to anyone who might encounter this type of public exposure?

JF: My main advice would be to have an army of game-loving fans who remember you from your glory days 10 years ago. Probably also, and this is good generic life advice, "try not to be a [jerk]." If she'd posted about me being a real [jerk], things might have developed differently. But I suppose this sort of stuff could happen to anyone with a large enough Google footprint, even if they are a "Grade D Celebrity."

CN: Do you think you were a victim of cyberbullying?

JF: I mean not really. 18-year-old Jon might have thought that, especially if it had been a girl that he had been really into, or had left himself vulnerable to, rather than just an uneventful, say goodbye forever kind of date.

CN: As of today, has she contacted you to apologize?

CN: On a lighter note. What are you looking for in a woman? Do you have a type?

JF: I always think people backwards rationalize their lists. My main criterion is, "When I wake up in the morning, do I want to see/call her?" That being said, I think I've devolved my list into two main things that I think everything else follows from: "Self awareness and intellectual curiosity."

JF: Someone smarter than me once said, "All good dates are the same but all bad dates are different." You just know when it's good - the details fade away. Oh, that and Jeffrey Dahmer-based One Man Shows.

CN: Playboy model Sara Jean Underwood asked you out on "Attack of the Show." Are you going to take the date offer? Ha ha...sorry. I had to ask. I think the entire Internet wants to see that date happen.

JF: I definitely don't want to let down the Internet. I would definitely be down to go on a date with her, but not if it's televised (sorry everyone). Just not my thing.

CN: Good luck on your tournament! And have a good holiday weekend.

JF: Thanks. Here's to hoping I make grandpa proud!

What does Bereznak and Gawker have to say?

About an hour after her initial blog post went up, Bereznak was already defending herself. She tweeted, "dudes, i don't think it's bad to be a dweeb. i just dont want to date someone i can't relate to. not an attack. more a cautionary tale."[sic]

On Wednesday, we learned that her internship at Gizmodo was over when Bereznak tweeted this announcement, "@gizmodo didn't fire me. my internship ended friday. sorry to disappoint you all."[sic]

We reached out to Gawker Media to see if there were any repercussions and how the company feels about her decision to reveal Finkel's name. They declined to comment.

Here are a few of the most pointed questions and answers (edited for grammar).

What was your first reaction upon reading her post about you? - Scarker

I felt a little, I dunno, violated. Even though the post itself didn't make me look bad at all (at least I didn't think). Still, it's sort of like someone publishing emails you wrote to your girlfriend, or posting part of your diary - it just feels wrong

Are you upset that she revealed your identity in the article, or do you think that ultimately this is going to work out for you with the great publicity? - OilGuy13

It's nice to know the Internet has my back, so in total it looks like it was a net positive, though I still feel oddly creeped out by it.

How many girls have asked you out since this all exploded? I noticed Felicia Day in your Twitter; did she say something to you? - kbilly

If you include Twitter messages from other continents saying 'Id date you', then a lot. As for Felicia Day, it appears she made a tweet or two about it, but I don't really know much about her, except that she seems like a lovely woman who is apparently loved by gamers.

Did she tell you she was a blogger? Did she hint maybe she would post about the date? - sweetgreggo

Did Gizmodo contact you at all about disclosing your name? - clifwith1f

Nope, although it looks like one of their editors just sent me an email 15 minutes ago, but I haven't really had time to sift through all my emails. This is already cutting into valuable [Pro Tour] Philly test time - which is the initial reason I took off work today.

What can you do if you've been bashed publicly?

We asked clinical psychologist Dr. Leah Lagos, Psy.D, to advise anyone who has experienced a public bashing and violation of privacy.

"Online dating, particularly for men, can test their self-esteem. Because it's often the men who do the asking it is often the men who are more vulnerable to rejection. The key here is to remain detached from the outcome," Dr. Lagos stated. "Strong emotional reactions on a first date, like love or hate, are likely to reflect the most about the person experiencing them. People sometimes forget that making oneself vulnerable is an inherently anxiety provoking experience."

This is typically a non-news item, except for the fact that it addresses social etiquette in an ever-evolving online culture. We have a responsibility to point out a line when it's been crossed.

MySpace deletes 12 years' worth of music