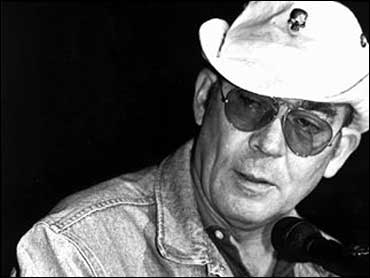 Friends and family of gonzo journalist Hunter S. Thompson are preparing to pepper the sky with the late writer's ashes.

His cremated remains will be shot into the air Aug. 20 from a cannon installed on a 150-foot-high tower behind his home in Woody Creek. The 67-year-old Thompson, who had been in failing health, shot himself at his home on Feb. 20 after a long and flamboyant career.

Johnny Depp, a close friend of Thompson's, has hired a Beverly Hills, Calif., events planner to oversee the event, which will be closed to the public.

"Hunter meant a lot to me. He was another hero and someone that I got to know very well because I played him in 'Fear and Loathing in Las Vegas.' We got very, very close," Depp said in a recent interview with AP Television News.

"He was a great pal, one of my best friends. We had talked a couple of times about his last wishes to be shot out of a cannon of his own design. ... All I'm doing is trying to make sure his last wish comes true. I just want to send my pal out the way he wants to go out," the 42-year-old actor said in the interview.