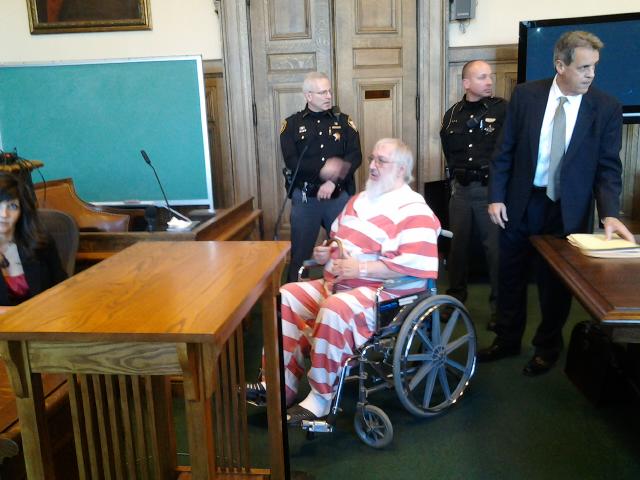 AKRON, Ohio - An Ohio man convicted of fatally shooting his ailing wife in her hospital bed was sentenced Friday to six years in prison.

John Wise, 68, has said he shot his debilitated wife in the head out of love in August 2012 after she suffered aneurysms and appeared to be in pain at an Akron hospital. Mercy is not a defense to a murder charge in Ohio.

The sentence issued by Summit County Court of Common Pleas Judge Mary Margaret Rowlands was in line with a prosecutor's recommendation that Wise receive a lighter punishment than the minimum 23 years on his most serious conviction, an aggravated murder count with a firearm specification.

Wise's attorney, Paul Adamson, said ahead of the sentencing that Wise will pursue clemency from the governor no matter the punishment.

County Prosecutor Sherri Bevan Walsh had called Wise's actions illegal and dangerous but said the case warranted leniency. She had recommended that Wise be sentenced on a lesser offense, manslaughter.

Neither side had found previous case law to support the prosecutor's suggestion that the judge could sentence Wise to six years for manslaughter, a charge that wasn't among the counts against him but is considered a lesser included offense.

The prosecution instead asked the judge to sentence Wise for his felonious assault conviction with a firearms specification, and the judge did so.

CBS affiliate WOIO reports Wise’s attorney had said his client was insane at the time of the shooting while prosecutors maintained he knew what he was doing.

Police say Wise calmly walked into his wife's hospital room on Aug. 4, 2012, and shot her at her bedside. She died the next day.

Wise told police he intended to kill himself after shooting his wife, but the weapon jammed.

"My recollection is that I walked in there, and within two minutes, I kissed her on the cheek and shot her," Wise told jurors.

Barbara Wise, 65, was in the intensive care unit at Akron General Medical Center after suffering triple cerebral aneurysms that had left her unable to speak, a family friend has said.

A doctor testified that Barbara Wise wasn't terminally ill and seemed to be responding to treatment.

Wise testified that he couldn't stand to see his wife of 45 years in pain in the hospital and decided on his course of action after seeing a tear roll down her cheek.