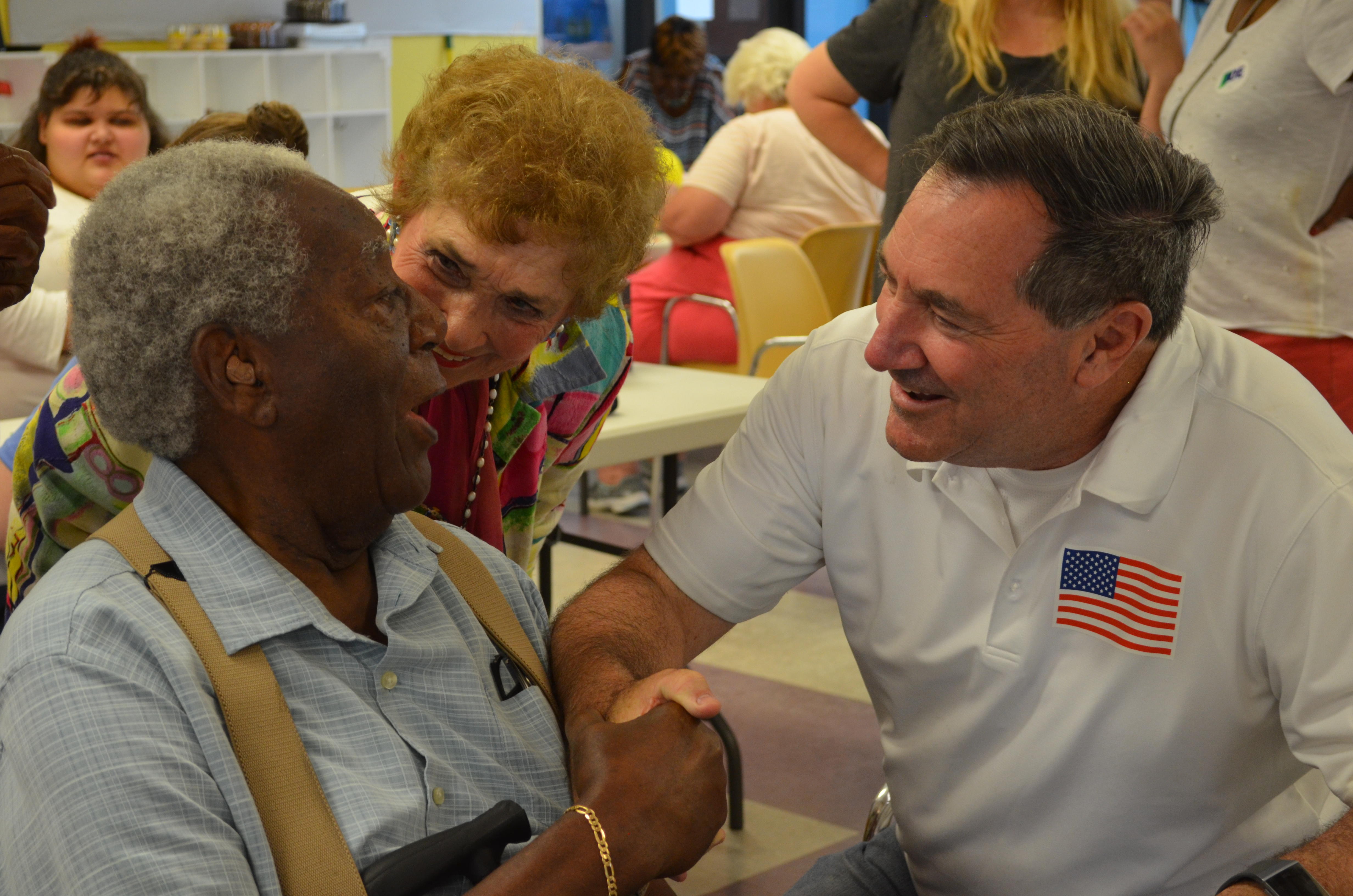 Locked in a tight re-election race, Sen. Joe Donnelly, D-Indiana, wasn't about to take Labor Day off, instead canvassing his state and meeting with Hoosiers, urging them to get out and vote this fall.

Donnelly touted his bipartisan record in the heavily Republican state and highlighted his independent streak in conversations with voters. He's believes his "pro-Indiana" stance -- meaning he's not a rubber stamp for a Trump agenda -- is one of the biggest differences between him and his opponent, businessman and former state Representative Mike Braun.

In an interview with CBS News in his campaign RV between campaign stops, Donnelly cited the late Sen. John McCain, a Republican who cherished his maverick reputation, saying he, too, wanted to follow McCain's example of "country first."

While he did not refrain from criticizing President Trump's trade policy, he also said he's willing to work with the president to improve it. Donnelly vowed to fight for Indiana soybean farmers, who he said have seen a 20-percent drop in their price per bushel, bringing the price below the cost of their production. "The damage has been caused by this trade policy and our farmers are hurting," he added.

According to the U.S. Chamber of Commerce, $1.1 billion worth of Indiana exports and 812,000 Indiana jobs are threatened by the trade war. In July, the Trump administration hit Chinese imports with some $34 billion in tariffs. China retaliated with a 25 percent on U.S. agricultural products, including soybeans and corn. The second round of tariffs, totaling $16 billion, went into effect on Aug. 23.

To help ease the pain on farmers, the U.S. Department of Agriculture (USDA) began the first round of emergency aid payments through the Market Facilitation Program (MFP) on Tuesday. The program will pay nearly $4.7 billion with about $3.7 billion going to soybean farmers. The USDA announced in July that a $12 billion aid package would be available to farmers through three programs to help farmers affected by the tariffs.

Donnelly said he's "glad" that aid is available to help farmers, but it's not a permanent solution. He went on to say that farmers have told him that they are afraid China might find other permanent sources of agricultural goods.

"It is putting a Band-Aid on a huge problem that we have," Donnelly explained. "We are grateful that those funds are there, but if this trade war or tariff war had never started, we wouldn't be in this position."

Donnelly's outspoken criticism of the president's trade policy has been a focus of his Senate re-election bid. In an interview with Fox News last week, Braun said that tariffs are "tricky," but defended the president's actions, justifying them as a remedy for the trade imbalance.

"For too long, career politicians like Joe Donnelly have failed to put America first and fix bad trade deals, and Hoosiers have faced the consequences," Mike Braun said in a statement provided to CBS News. "In life and in business there's the short-run and the long-run, and while Senator Donnelly wants our trade negotiations to 'end now,' I applaud President Trump's action to rectify the longstanding inequities in our trade relationships that have hurt Hoosier workers, and feel my experience in business would be a great asset to the administration in the Senate."

Donnelly countered, "Just doing something isn't necessarily a good thing. You have to do something that is good. I want to work with the president on this."

Donnelly doesn't oppose all of the tariffs, however. He approves of the steel tariff as a way to counter China's steel dumping. However, Donnelly added that steel tariffs are "one single stove pipe," and the other tariffs the Trump administration has implemented could have been avoided.

"We did not need to create this huge explosion all around it," Donnelly noted. "We needed to fix that piece, but you didn't need to do all of the collateral damage that has occurred around it."

Donnelly, who made campaign stops in Lowell, Lafayette, Clinton and Terre Haute on Monday, is one of 10 Senate Democrats running for re-election in a state Trump won in 2016. In the 2016 presidential election, Trump won Indiana by 19 points. Donnelly's campaign events in Lafayette, which is in Tippecanoe County, and Clinton, which is in Vermillion County, are a couple of critical locations that will determine the Senate race this November. Donnelly won both of these counties in 2012, and President Trump carried them in 2016. In total, there are 22 counties in Indiana that Donnelly won in 2012 that voted for Trump in 2016.

Donnelly was ranked as the most bipartisan Senate Democrat according to the Lugar Center and Georgetown University's McCourt School of Public Policy. He is marketing his bipartisanship in ads this cycle as well in an effort to appeal not only toDemocratic voters, but also to pro-Trump and independent voters. Last week, Donnelly released an ad titled "Working," where he highlights his recent immigration stance by "joining with President Trump to build a wall and protect our borders."

Sadie Harper-Scott, the Lafayette and West Lafayette Branch President of the National Association for the Advancement of Colored People (NAACP), said she appreciates Donnelly's commitment to being a voice for all communities in Indiana and appreciated his ability to reach across the political aisle and work with Republicans.

"Indiana may be a red state, but we got Joe Donnelly," she said.

But others, such as Vicki Burch, who is running for local office in Tippecanoe County, said she plans on voting for Braun in the Senate race. Burch stated she likes that Braun is running as an outsider.

"I want some fresh blood in the Senate," Burch said.

Unlike his fellow Democratic Senate colleagues running for re-election this fall, Donnelly's campaign ads include complimentary footage of President Trump. In the ad "Fighting Chance," Donnelly's campaign includes a photograph of Donnelly and Trump shaking hands and video footage of Trump congratulating Donnelly for his work on the legislation saying, "Senator Donnelly, thank you very much." Donnelly was the primary co-sponsor on the legislation, which allows terminally-ill patients to try experimental medical treatments that are not fully approved by the Food and Drug Administration (FDA).

Although Donnelly has voted with the president over 50 percent of the time according to FiveThirtyEight, Donnelly has been criticized by the president for his opposition to the tax cut passed last year and the Republican-led efforts to repeal and replace Obamacare. Donnelly has also faced criticism from Braun, who launched Tuesday his "Solutions Tour" around the state,  to support Supreme Court nominee Brett Kavanaugh. Donnelly, who was one of three Senate Democrats to vote for Supreme Court Justice Neil Gorsuch, was the second Senate Democrat to meet with Kavanaugh.