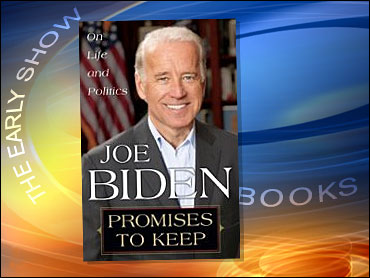 Joe Biden knows a thing or two about politics.

He's been representing Delaware in the Senate for 34 years, and is in the midst of his second run for the White House.

But Biden is also very familiar with the toughest lessons of life.

He writes about it all in his new memoir, "Promises to Keep: On Life and Politics."

The autobiography's publisher, Random House, bills it as "a book about resilience," telling of Biden's "rebound from personal loss, political embarrassment, and life-threatening aneurysms."

"It wasn't so much Robert Frost, initially," Biden told Smith. "As I went through the book, I was raised in a way that was constantly said, you know, 'A promise made is a promise kept. You've got to keep your word.' Originally, I was going to entitle the book 'Get Up,' because my father, you know, you lose a game, get up. You lose a family, get up. It's just constantly get up and move. But one thing led to another. And it seemed more appropriate to go back to Frost."

Written with the candor Biden has come to be known for, "Promises to Keep" describes the tragic loss in an auto accident of his wife and infant daughter when the then 30-year-old was a newly-elected senator. The accident also badly injured Biden's two young sons, and he writes that just looking at them inspired him to keep going at a time when he'd come to understand how some people could consider suicide not "just an option, but a rational option." Biden also goes into his decision to remarry and start a family again.

The narrative recounts the collapse of his 1988 presidential campaign under the weight of plagiarism charges, and his struggle to rebound from two near-fatal brain aneurysms. And it recalls his overcoming a demoralizing stutter that lasted into his teen years.

The book has lots of memories of behind-the-scenes exchanges with prominent politicians and world leaders.

And Biden doesn't hold back in criticizing the Bush administration.

He also recalled how he kept going after the deaths of his first wife and infant daughter, saying, "I've never written about that or spoken about that. The reason I write about it, you know — we can overcome anything if you just — it was kind of like, for me, it was kind of like running wind sprints in football. You know, you go out there and you say you got 20 wind sprints. 'Just do one more, do one more.'

"When I went through that, I had a lot of help from great senators and family and friends. But it was every day, you get up and you just say, 'Just one more day, just do one more day. You get through this, just do one more day.' And I had all the help in the world. It made me realize, I mean, all those single parents out there ... all those people walking right now, getting up, going to work, who had a lot more on them than I did, and they make it. Every day, there's something heroic about average people out there."

To read an excerpt of "Promises to Keep," click here.

ICE Your Cell Phone For Safety

Fit At 50 And Beyond