For months, the news on jobs has been as follows: less bad=good. That's OK if you're an economist, but obviously not particularly helpful if you are one of the six people looking to land that one job offering. As MoneyWatch blogger Mark Thoma notes, this has been a brutal decade for private sector jobs.

As I think about the scourge of unemployment in the country, I keep coming back to Patience and Fortitude, the lions that guard the steps to the Main Branch of the New York Public Library. 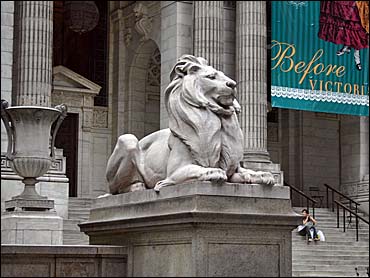 (CBSNews.com/Gordon Donovan)
The lions began their reign on 42nd Street in 1911 as "Leo Astor and Leo Lenox," after library founders John Jacob Astor and James Lenox. However, during the hardships of the 1930s, New York City Mayor Fiorello LaGuardia renamed them Patience and Fortitude, the qualities he believed would help New Yorkers navigate the perilous Great Depression.

It seems apt to invoke Patience and Fortitude as we (hopefully) emerge from the Great Recession. After all, when the twenty year debt bubble exploded, everyone was going to pay the price. My grandmother, a survivor of the Depression herself, used to say "cheap is expensive" when referring to shoddy goods and services - I would update that by saying "cheap credit is expensive." It will undoubtedly take patience and fortitude to survive the recession and the subsequent recovery.