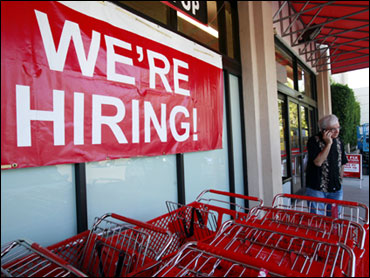 U.S. employers posted a sharp increase in job openings in October, raising hopes that hiring could pick up in the coming months.

Businesses and government advertised nearly 3.4 million jobs at the end of October, up about 12 percent from the previous month, the Labor Department said Tuesday. That reverses two months of declines and is the highest total since August 2008, just before the financial crisis intensified.

Overall, the number of advertised jobs has increased by about 1 million, or 44 percent, since the low point of July 2009, a month after the recession ended. But openings are still far below the 4.4 million advertised in December in 2007, when the recession began.

The latest job openings data follows last week's disappointing employment report for November. That showed the economy added a net total of only 39,000 jobs, a steep drop from the previous month, and the unemployment rate rose to 9.8 percent from 9.6 percent.

But some economists consider Tuesday's report, known as the Job Openings and Labor Turnover survey, to be a signal of how much hiring might take place one to three months after the period covered by the survey.

Jonathan Basile, an economist at Credit Suisse, said the JOLTS report echoes other recent data showing that the economy is improving. That improvement will likely translate into more hiring soon, he said.

Last week's employment report "should turn out to be just a bump in the jobs recovery road," Basile added.

Separately, a private survey released Tuesday showed that employers expect to boost hiring in the first three months of next year by the most in more than two years.

Staffing company Manpower Inc. said that its U.S. hiring index rose to 9 percent for January-March quarter of 2011, from 5 percent in the October-December quarter of 2010.

That's the highest since the final quarter of 2008, though less than half the level that is consistent with a healthy economy. The index averaged about 20 percent from 2003 to 2007.

"The job market may be getting ready to shift into second gear," Jonas Prising, Manpower's president of the Americas, said.

The JOLTS report shows that the competition for jobs is still tough, but improving. There were, on average, 4.4 unemployed workers for each available job in October. That's down from 4.9 in September and the lowest since January 2009.