4963930At the end of this month the Great Recession will officially be two years old. This will be the longest economic crisis in the United States since the Great Depression and the longest American recession since Chester Arthur was president. That 1882-1885 recession was sparked when the railroad boom bubble popped, wiping-out thousands of construction jobs. Sound somewhat familiar?

Of course, all recessions result in job losses. What's helped the American economy recover quickly in the past are innovations that have created new employment to replace the jobs lost during the downturn. One recent example is the employment opportunity created by the explosion in internet-related businesses that followed the 1990-1991 recession.

Unfortunately, there does not seem to be a giant job engine quickly emerging to help the 26.9 million Americans out of work or in part-time jobs find good paying jobs that create prosperity. This is the hand the Obama Administration has been dealt as it approaches its first full year in the White House.

President Obama's new plan to push left over money from the Troubled Asset Relief Program to small business and infrastructure construction is designed to bring the unemployment rate down from 10 percent. The administration's proposal includes tax cuts for small business and tax credits to firms that do hire. 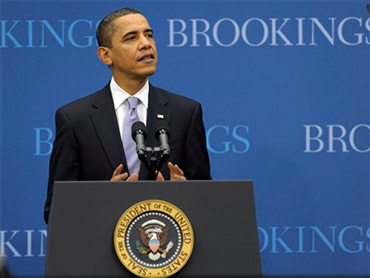 (AP Photo/Susan Walsh)
Proponents of the plan are quick to point out that small businesses create about 2 out of 3 new jobs in America. Small businesses are also usually better at innovation. Somewhere there's a grad student and some buddies creating the next Microsoft. The Administration hopes these moves will help such a start-up bloom quickly.

There is a good chance that these new moves will help create jobs. At the very least, they should allow businesses struggling through the recession to hold onto valuable employees.

But a new survey of top CEO's finds it could take 12-18 months before any growth at large companies filters through to employment. Just two in ten think they will be hiring in the next six months. At the moment it seems unlikely that the president's initiative can bridge the growing job gap that threatens to swallow-up a strong and sustained recovery.

Economist Heidi Shierholz of the Economic Policy Institute, a progressive think tank in Washington, has run the numbers and it's not pretty.

Basically the job market is almost 11 million jobs short of the pre-recession employment rate. To fill the gap, American businesses will need to create 580,000 jobs a month over the next two years. Few economists dare predict that kind of job growth by 2011.

So where does this job gap likely leave American workers?

Based on what we hear from economists almost daily -- it's not a good place. A full recovery in the job market could take 5 years, probably longer. This will continue to be an especially hard time for hundreds of thousands of middle-aged workers. Their skills may not match well with the new industries that create future jobs. Prospects for younger workers are much better (aren't they always?)-- especially if they have a firm foundation in the so-called STEM skills -- Science, Technology, Engineering and Math.

CBS News Chief Business Correspondent Anthony Mason is looking into the job gap and what can be done to fill it for his January report "Where America Stands: The Job Gap" on the CBS Evening News with Katie Couric. Based on our early reporting, I can tell you it's a fascinating topic and one that will have a remarkable impact on shaping the direction of the country over the next decade.

Today, Mr. Obama took yet another step toward filling the gap. Realistically it will take many more moves over many more months by both government and business to help repair the profound damage inflicted upon the American job market. Any poker player will tell you, it takes great skill and a whole lot of luck to build on a ragged hand.

Guy Campanile is a CBS Evening News business producer. You can read more of his posts in EconWatch here.