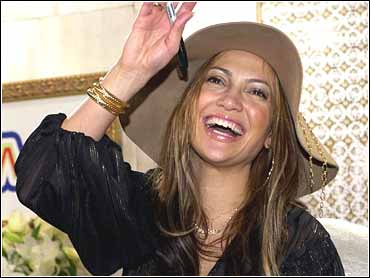 Sean "P. Diddy" Combs, the self-proclaimed "bad boy for life," says Jennifer Lopez is his "girl for life," even after her surprise weekend wedding to Marc Anthony.

The hip-hop mogul, who had a high-profile, two-year relationship with Lopez, said he's glad his ex has found love with someone new, but added that she'll always be important to him.

Lopez and Anthony reportedly tied the knot Saturday in a small ceremony at her Beverly Hills, Calif., home. Anthony's publicist would not comment Monday. Lopez's spokesperson didn't immediately return a call Monday, but told The Associated Press on Sunday that he had no comment.

"If she's in love with somebody and that makes her happy, I'm happy for her," Combs tells "Access Hollywood" in an interview airing Monday night. "That's my girl for life."

But dancer Cris Judd, Lopez's second husband, said he was surprised to learn that she'd married Anthony, the Latin singer she first dated in 1999.

"She did?" Judd asked, then added, "You know what? I wish her and Marc the best and hey, if it's true to her heart then by all means."

Judd then turned to the syndicated entertainment show's cameras and sent the newlyweds a message: "Jen, Marc, I wish you the best, and happiness, definitely."

And the man who could have been husband No. 3, Ben Affleck, gave the union "two thumbs up," according to US Weekly.

This is the third marriage for the 34-year-old Lopez — the first was to waiter Ojani Noa in 1997, the second to Judd in 2001. Noa lasted a little more than a year; Judd for nine months.

The singer-actress also was engaged to Affleck, her "Gigli" co-star, but amid a huge media frenzy they canceled their plans in September 2003 and broke up in January.

Anthony, 34, just divorced former Miss Universe Dayanara Torres last week in the Dominican Republic. They married in 2000 and have two young sons; Anthony also has a daughter from a previous relationship.

Anthony is scheduled to appear on NBC's "Today" show and ABC's "The View" on Tuesday to promote his new album, "Amar Sin Mentiras," which means "To Love Without Lies" in Spanish.