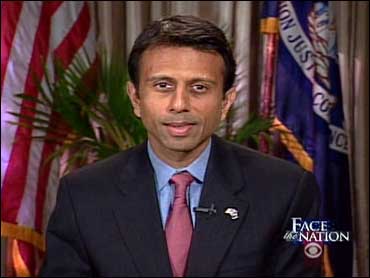 When asked about the future course of the Republican Party following their losses on Election Day - losing not only the White House but also considerable ground in the House and Senate - Gov. Bobby Jindal of Louisiana said it is imperative his party offers solutions to voters, and not just be the opposition.

"As Republicans, we need to do three things to get back on track," he said on CBS' Face The Nation. "Number one, we have got to stop defending the kind of spending and out-of-control spending that we would never tolerate in the other side. You know, when voters tell us that they trust Democrats more to cut their taxes [and] control spending, that tells you something is wrong with the Republican Party. We've got to match our actions with our rhetoric.

"Number two, we've got to stop defending the kinds of corruption we would rightfully criticize in the other party. The week before the election, our most senior senator is convicted on federal charges - and that's only the latest example.

"Number three, we have got to be the party that offers real solutions to the problems that American voters, American families are worried about. We don't need to abandon our conservative principles; we can't just be the 'party of no.' We need to offer real solutions on making health care more affordable, on the economic challenges facing families, on the international threats."

"When you look at the governors - Governor Jindal and what he's doing in Louisiana; you look at Governor Mitch Daniels, who won by 20 points in Indiana, while McCain was losing it; Governor Jon Huntsman, who has the lowest unemployment rate in the entire West in Utah and a $1 billion surplus last year, about a $300 million surplus this year - there are a lot of lessons to be learned out there."

Another name that came up was Alaska Gov. Sarah Palin, who appeared to dominate news from the conference of Republican governors last week.

(CBS)
"The natural pattern in the news media is going to be, they know how to spell Sarah Palin's name; they have it locked in their word processor," said Gingrich (left). "She's going to be a much bigger story in the short run. But, I think, as she goes back to being governor and as she works in Alaska, you're going to see a group of governors emerge, not just Sarah Palin. And there are 36 governorships up in 2010.

"I think focusing on rebuilding the Republican Party from state legislature and governor to Senate and House is the right model. And I think that the Republican Governors Association is probably more important than the Republican National Committee in trying to get this done."

"So you do not see [Palin] as the de facto leader of the party at this point?" Schieffer asked.

"No," said Gingrich. "She's a wonderfully, intelligent, aggressive hardworking person who got, you know, hammered very badly by the press in, I think, fairly distorted ways.

"And in each case, I watched us, within a short time, focus on new ideas and new solutions and, within a very short time, come back as a stronger and healthier party."

Frank said the House is ready to pass a bailout package, saying failure to do so would inflict pain on an already very weakened economy.

Shelby, however, said that a bailout of the auto industry would be "the wrong road to go down right now," and said he would prefer troubled automakers file for bankruptcy rather than get taxpayers' money.

(CBS)
"Some people believe that Chapter 11 bankruptcy would be a lot better management than what they have today," said Shelby (left), "where they would reorganize, they would get rid of the management that has brought them to where they are today, bloated contracts, everything that goes with it. No profits, no products to sell, to speak of.

"[It's] headed down this road to oblivion. Should we intervene to slow it down, knowing it's going to happen? I say no, not for the American taxpayer."

Frank disagreed: "It might be one thing to tolerate a bankruptcy if we had a lot of jobs out there, if there was prosperity.

"When you talk about the negative shock that would result from bankruptcies of these companies right now - and by the way, I wouldn't be blithe about Chapter 11. There are suppliers out there who are owed money, smaller businesses. They get hurt in a bankruptcy. There are a whole range of people who didn't make bad decisions at GM here."