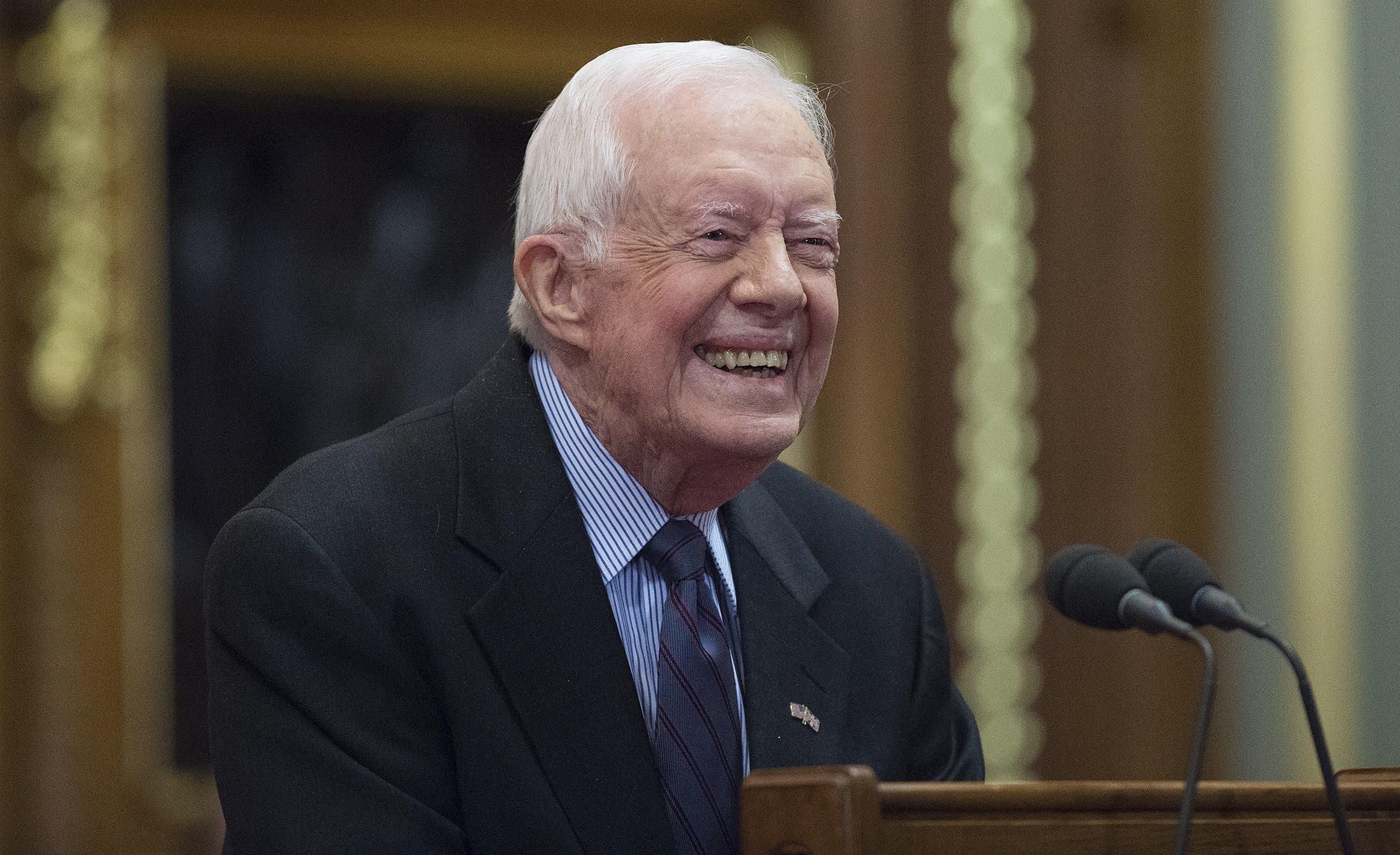 Former President Jimmy Carter offered a damning indictment of U.S. foreign policy and domestic affairs Tuesday, saying money in politics makes the nation more like an "oligarchy than a democracy" and casting President Donald Trump as a disappointment on the world stage.

Carter's criticisms, offered at his annual presentation to backers of his post-presidency Carter Center in Atlanta, went beyond Trump, but he was particularly critical of the nation's direction under the Republican president's leadership.

The 39th president, a Democrat, offered this advice to the 45th: "Keep the peace, promote human rights and tell the truth."

Carter, 92, did not mention explicitly Trump's threatening exchanges this summer with North Korean dictator Kim Jong-un, but the former president said the U.S. should engage directly with the insular leader and discuss a peace treaty to replace the cease fire that ended the Korean War in 1953.

"I would send my top person to Pyongyang immediately, if I didn't go myself," Carter said, noting that he's been three times to the country, even as successive U.S. administrations have refused to deal with the regime.

The North Koreans, Carter said, want a treaty that guarantees the U.S. will not attack unless North Korea attacks the U.S. or an ally, particularly South Korea. "Until we talk to them and treat them with respect — as human beings, which they are — I don't think we're going to make any progress," Carter said.

He also dismissed Trump's optimism that he can engineer Middle East peace. Trump has tasked his son-in-law, Jared Kushner, with handling the issue that has vexed U.S. administrations for generations, but the president notably backed off the long-held U.S. position calling for a two-state solution between Israel and the Palestinians.

Carter said he is "practically hopeless" that anything Trump comes up with would give "justice to the Palestinians."

"I don't think Trump or his family members are making any process in that respect," he said. Carter criticized both Israeli and Palestinian leaders for a lack of flexibility, but he singled out Israeli Prime Minister Benjamin Netenyahu, a Trump ally, for having "no intention at all of having a two-state solution."

The former president and his wife, Rosalynn, largely steer clear of partisan politics, long having yielded any active role in the Democratic Party. But they maintain their high-profile advocacy through the Carter Center, which focuses on human rights, public health and democratic elections.

Carter on Tuesday defended the center's role in monitoring the August presidential elections in Kenya that the country's Supreme Court later discarded. The court has ordered a new election.

The Carter Center's monitoring team, led by former Secretary of State John Kerry, said days after the vote that the process of casting paper ballots was fair, but that the electronic tabulations were "unreliable." Carter said Tuesday that international monitors were not allowed to observe the counting process.

The center also remains engaged in trying to end the Syrian civil war, Carter said. He noted that he and others from the center have engaged Russian President Vladimir Putin and others trying to broker peace.

Carter touted a program at his center that tracks social media usage in the war-torn nation. By identifying the locations of individual posters with known political and military affiliations, Carter said, analysts can discern which factions control various cities and provinces. Carter said the center shares that intelligence with the Pentagon, the State Department, various media outlets and foreign allies of the U.S.

Carter made no mention of ongoing inquiries into Russian interference in the 2016 U.S. presidential campaign or potential ties between Russia and the Trump campaign.

At 92, Carter is second eldest living U.S. president and fourth longest-lived president in history. His birthday is Oct. 1. George H.W. Bush, the eldest living president, turned 93 on June 12, putting him 92 days into his 94th year. Ronald Reagan was 120 days beyond his 93rd birthday when he died in 2004. Gerald Ford died two years later, having lived 165 days beyond his 93rd birthday.

Carter already has the longest post-presidency, having been out of office for 36 years and almost 8 months.