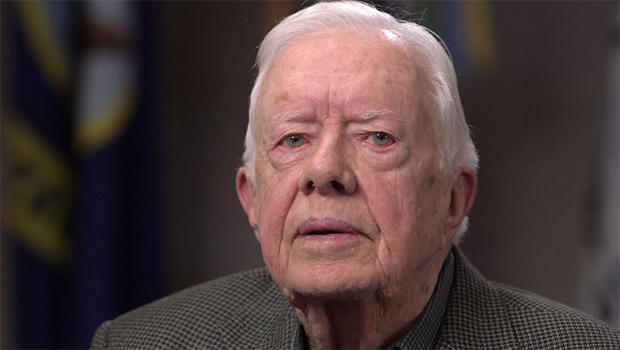 Former President Jimmy Carter told CBS' "Sunday Morning" that, regardless of whether Special Counsel Robert Mueller's investigation of Russian interference in the U.S. election should uncover evidence of law-breaking on the part of the president, he would prefer President Donald Trump not be impeached.

"You know, I have confidence in the American system of government," he told "Sunday Morning" host Jane Pauley. "I think ultimately the restraints on a president from the Congress and from the Supreme Court will be adequate to protect our nation, if he serves a full term.

"And I think he will serve a full term unless the special investigator, Mr. Mueller, brings some criminal charges against him."

"What do you think the odds of that are?" asked Pauley.

"I don't have any idea," Mr. Carter replied. "I think Mueller's been very successful in keeping his cards close to his vest and not revealing any plans. But my wish is that Mr. Mueller would go ahead and make a decision, even if it's not anything personally that President Trump has done to violate the law; then I think he ought to make that obvious. And if he has violated the law, that ought to be revealed as well.

"But my own preference would be that he not be impeached, but that he be able to serve out his term, because I think he wants to do a good job. And I'm willing to help him, if I can help him, and give him the benefit of the doubt."

In an interview about the role that faith has played in his life, which aired on "Sunday Morning," Mr. Carter also offered his opinion on President Trump's dealings with North Korea: "I have had some criticisms of some of the public statements that President Trump has made about 'fire and brimstone' and that sort of thing being utilized," he said, adding that Mr. Trump has "reacted quite well" to word that North Korea wants to talk.

Mr. Carter also said he would be willing to go to North Korea to help if the president needed him.