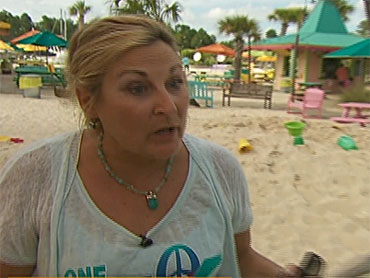 One of the biggest attractions on the Gulf's Alabama coast is LuLu's. "LuLu" was Lucy Buffett's childhood nickname. And she shares the same of love of this area as her famous brother Jimmy.

People come to LuLus from all over the south. Lucy told "Early Show" co-anchor Harry Smith she served 800,000 people last year. Smith said people come to LuLu's for the cooking and the karma.

Lucy said, "My thing is giving a positive experience and it's worked."

But the oil and the worry and the aggravation is just about inescapable, Smith remarked, and it's wearing folks out.

Lucy said, "There is this free floating I call it invisible anxiety that's just heavy like the humidity because people feel so helpless because they don't know."

Lucy explained, "What people don't understand is that we're dealing with tides and winds and currents is different everyday I think that's the thing, if you could say that oil is going to hit this shore in two weeks, it's going to be four feet thick, boom done, it's the not knowing that is driving people crazy, its driving people into despair, that's the sad part."

So people come to LuLus and hope maybe some of Lucy's good vibrations rub off a little. It seems to run in the family.

Lucy told Smith, "I walk those beaches, that ocean is mighty, she is going to be OK. Nature takes care of itself, I know it. It will take time. I did a little meditation and what I got was she said, 'I'll be fine, you all need to take care of each other.'"

And now that's Lucy's new motto: "One love, one ocean" -- a little Bob Marley with an idea that's hard to deny. After all, Smith said, the world's great oceans are all connected.

Smith asked Lucy, "You are still hanging in, you're still resilient?"

Lucy replied, "I'm better than hanging in. I am."

"Totally," she said. "I know I know it's crazy. I was thinking this morning I knew you were coming over here and I thought, 'Am I angry at BP? No. Am I angry at the president? No. Am I angry? Yes.' I am angry that this happened at all. Now what do we do about it? That's what I tell those people. Get creative! I don't want to talk about yesterday. I want to talk about tomorrow. What are we going to do to solve this problem?"

To demonstrate support for the people, businesses and culture of the Gulf coast, CMT network will telecast a free musical celebration live from the beach at Gulf Shores, Ala. CMT Presents Jimmy Buffett & Friends Live from the Gulf Coast will air on CMT on Thursday, July 1, from 8-9:30 p.m. ET/PT. Buffett and his Coral Reefer Band will be joined in the concert by his friends Sonny Landreth, Zac Brown Band, Kenny Chesney, Jesse Winchester, Allen Toussaint, and additional special guests. For more information, click here.

Perils of Carrying Kids in Your Lap on Planes