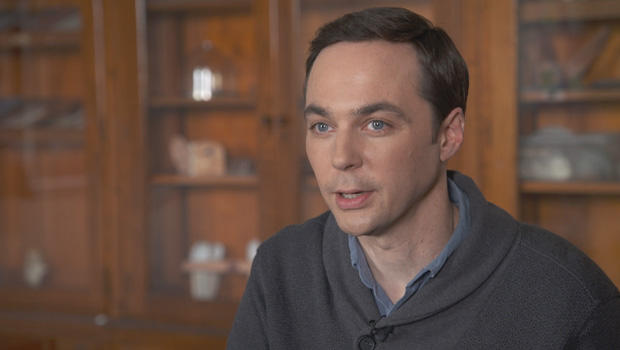 Jim Parsons may play the annoying know-it-all nerd in the hit CBS TV series "The Big Bang Theory," but he faced a very steep learning curve recently when a different sort of job placed him behind the camera. He's shared what he learned with Richard Schlesinger of "48 Hours":

There is a great deal about Jim Parsons' latest role in the new movie "A Kid Like Jake" that not so many years ago would have been difficult to imagine. This time he's not just the star; he is also one-half of the husband-and-husband producing team behind the film, that focuses on two parents (played by Parsons and Claire Danes) trying to find the right school for their four-year old son, Jake, who likes to dress as a princess.

"I love to act; it's an insatiable desire of mine," Parson said. "I feel like I can't control it."

Schlesinger asked, "Do you love to produce?"

Parsons is known as an actor with a broad range. He became an A-List star in the CBS sitcom "The Big Bang Theory." He is also a stage actor, starring these days on Broadway in a revival of "The Boys in the Band" ... and he's presenting an award at the Tonys tonight.

But this is his first role behind the camera as a producer.

Schlesinger asked, "Where did you get the producer bug?"

There's been a bit of a learning curve. When asked what doesn't he know, Parson said, "Oh, I don't mind talking about what I don't know. I don't know ... oh, I don't know all the things that one must consider when putting together a project. I'm learning them."

Parsons was on location at a school last summer in Brooklyn, N.Y., when we first caught up with him.

He and Claire Danes were shooting scenes not at all unfamiliar to her: "I happen to be the mother of a four-year-old son, living in New York City, and I had just gone through that process, that gauntlet of applying to elementary schools, which here is very intense," she said.

It's a little more difficult for Danes and Parsons' characters in the movie, because their four-year old, Jake, might be transgender. They seek help from their friend, a counselor played by Octavia Spencer.

Spencer: "But you know that I care very deeply about Jake, which is why I'm doing everything in my power to place him somewhere where he feels safe and comfortable enough to …"
Danes: "... to dress like a girl?"

Throughout the filming of this movie, based on a play by Daniel Pearle, Parsons was juggling his two roles, as actor and boss. "There's a lot of feeling this out as I go. And there's a lot of relying on a lot of other people who do understand things better," he said.

One of the people he relied on was his producing partner and his life partner, husband Todd Spiewak.

Parsons admitted that they spend a lot of time at home talking about the movie. "We do. He runs out of the room every time I put the dailies on my computer," Spiewak added.

The film's director is Silas Howard, who brought an intensely personal perspective to this film. Gender issues are not just someone else's issues to Howard. He was born female, and transitioned in graduate school: "For a kid, right around five, six, seven, eight, they pretty much know who they are, kind of what they're going to do and if they're going to grow out of it. I think the problem is never with the kids; it's sort of the world around them."

Howard insisted the role of Jake had to come naturally to the young actor playing him: "I wanted a little boy who loved being a princess."

The part went to Leo James Davis. "Little Leo has amazing looks, pulls the best fashions, is very clear on what he likes, has been that way since age two," Howard said. "He's fine. He'll wear boy's clothes, too, but he really loves, you know, wearing dresses and he loves whatever. And his parents are so on board. They're super-supportive."

Howard's boss, Jim Parsons, is one of TV's highest-paid actors, and could have chosen pretty much any film as the first one he produced. He said this was time to make this film, while there is a debate about who can use which bathroom and the role of transgender soldiers.

"I think it might be more important than ever, even if mostly what you want to do is act, to get your face and hands in there as early as you can, to make sure that the stories you're interested in telling have a chance to be told," Parsons said.

But Parsons and Claire Danes see themes in this film that go beyond whatever problems parents have if their kids might be transgender. It is especially emotional for Danes, who is expecting her second child.

"We all are told that our children should be special, but not different, and those are … that's a very kind of confusing message to have," Danes said. "Suddenly, these alarms sound. And I'm crying thinking about it, because it's very moving. It's, like, she, just … parents want their kids to be safe."

"Sorry, I made you cry," Schlesinger said.

Danes, who's an executive producer and star of Showtime's "Homeland" series, has already learned what Parsons is now finding out: Producers and parents are not entirely un-alike. Both go through some pain to create something they hope will be valuable.

Schlesinger said, "When we first met, you said you were just sort of learning as you go the role of producer. So, now that it's all done, how'd that all work out for you?"

"Well, I would say that in the first week that we wrapped, my first feeling was, never again," Parsons said. "I thought, Well, that's done. Ooch, I don't know if I'll do that again. And then as we kept moving on, I was like, Yeah, I will. Because some of the things that I don't enjoy about it are worth going through to get to the parts that I love."