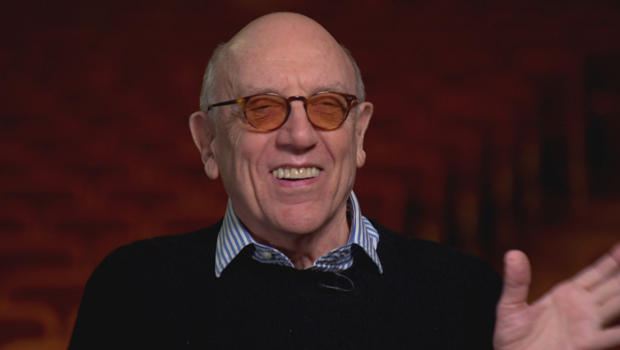 "The Boys In The Band" was a 1970 movie based on a no-holds-barred play about gay life in a difficult time. Now "The Boys" are back, on Broadway this time, and not a moment too soon, says the playwright -- who talks with Erin Moriarty of "48 Hours":

You've heard the phrase "Good things come to those who wait"?  Well, Mart Crowley has waited half a century for this – his play, "The Boys in the Band," promoted on the marquee of Broadway's Booth Theatre.

He described to Moriarty his experience of seeing it for the first time:  "It was one day when it was pouring rain, and I didn't care. It was just so great. I was getting soaking wet and I was standing outside, looking at it with disbelief."

Fifty-one years after writing "The Boys in the Band," Crowley's play has finally made it to Broadway with a star-studded cast.

None of this seemed remotely possible back in 1967 when Crowley was a Hollywood screenwriter with lots of celebrity pals, but few prospects. "I had written and sold a screenplay to 20th Century Fox for my friend Natalie Wood," he recalled. "And then two weeks before shooting began, Darryl Zanuck pulled the plug on it."

At 31 years old, he had no work and no income, so he sat down at his typewriter. "And five weeks later, I had a play."

Moriarty asked, "Did you have any idea of how controversial, how difficult it would be to get on the stage?"

"No," he replied. "It had to be apparent to me, but I kept pushing that out of my head. I didn't want to stop writing."

It wasn't the plot that was the problem; it was the characters: nine men, eight of them gay, talking about their lives inside the closet at a birthday party set inside a New York apartment. "The Boys in the Band" was an act of rebellion for the gay playwright trying to survive in 1960s America.

A CBS documentary anchored by Mike Wallace -- aired the same year Crowley wrote "The Boys in the Band" – reported, "There is a growing concern about homosexuals in society, about their increasing visibility … We discovered that Americans consider homosexuality more harmful to society than adultery, abortion or prostitution."

Crowley said, "It certainly was a taboo. Historically in American plays, there were always gay characters, but they always come to a bad end, you know? It was not a good thing to be gay back then, and to be out about it at all. That was just not done."

But with nothing left to lose, Mart Crowley let loose, and wrote about a world theatergoers had never seen.

Moriarty said, "You decided to put it right out there, for gays, straights, for everyone."

"Yeah, it was just this wonderful creative urge that I had, and I was just like a time bomb."

A time bomb fueled by long, simmering anger. "Anger from all sides. From the way the world treated gays and from the way the show business was treating Mart!" he laughed. "I was up to here."

Crowley's characters were also angry, so it's no surprise that he struggled to find producers, actors, or even an agent to stage his play. "The woman agent said to me, 'This is an outrageous play. I cannot send it out of this office with our letterhead on it.' And I almost collapsed into tears right there, 'cause I thought, This is really the end of the line."

Still, in January 1968. "The Boys in the Band" finally had its first audience in a tiny theatre downtown. The response? "The next morning, there was a line around the block," Crowley said.

It was a hit!  The play moved to a bigger theatre, ran for 1,001 performances, and in 1970 was made into a movie with the original cast, directed by William Friedkin.

Mart Crowley's career was back on track. The play, he said, saved him. He returned to Hollywood, and became head writer for the popular TV show "Hart to Hart."

But this got complicated for his play. Fourteen months after its Off-Broadway premiere, a series of violent demonstrations, known as the Stonewall Riots, began the push for gay rights, and activists felt "The Boys in the Band" was on the wrong side of history. They were offended by the way Crowley presented his characters as wounded and self-loathing, and not above turning on each other.

"Because they thought that it showed the characters in a negative light," Crowley said. "There was a lot of self-hatred going on, and they wanted pride, which became the word -- you know, out and proud.

"And there was a kind of boosterism spirit that was in the air -- 'Why don't you write something that's positive about the gay experience and about gay people?' Well, there wasn't anything positive when I wrote the play."

Yet, acclaimed actor-director Joe Mantello agreed to direct the play for its 50th anniversary, and bring it to Broadway.

Mantello told Moriarty that, like a lot of gay men of his generation, "I had a very complicated response to the play. [But] like any good play it exposes things that might embarrass us as gay men. But it also gets at the truth of something as well. And I think that's why it's lasted for fifty years."

Oh, have times changed. One of TV's highest paid actors, Jim Parsons from "The Big Bang Theory," has a starring role, joined by a veteran cast of performers.

Do the actors feel they're taking a risk with these roles, fifty years after the writing?

"Only performing live every night – what if I vomit on myself?" laughed Parsons. "No, I mean other than that, no. I really don't."

Zachary Quinto said, "This is a cast of entirely openly gay, successful accomplished actors, and that's certainly different than it was fifty years ago. But if you look at what we're up against, legislatively and ideologically, is it that much different? I don't know."

Only one cast member, Tuc Watkins, was even alive when "The Boys in the Band" was first staged: "And at fifty years old, I'm about twice as old as the youngest cast member, but I would probably guess I've got twice as many fears about what it means to be gay. If I have twice as many fears as the youngest guy in the cast does, it's because we're standing on the shoulders of giants."

"I think it's important to look back and see that this cast can do this play now because of how far we've come," said Matt Bomer.

And Michael Benjamin Washington says it all began with one angry man: Mart Crowley.

This week on "Sunday Morning" (January 2)