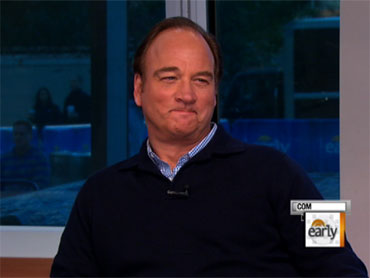 A new fall prime time show expected to make a splash is "The Defenders," a drama about a pair of Las Vegas defense attorneys.

Veteran actor Jim Belushi plays the role of Nick Morelli, a hard-nosed lawyer with a soft spot for his clients.

In the show, art imitates life -- the characters are based on real-life Vegas attorneys Michael Cristalli and Marc Saggese.

"Yes, there's a criminal law firm in Vegas and they had a documentary done on them and basically, CBS bought the rights and wrote the script for me and Jerry O'Connell. These guys are characters," Belushi said.

While the real 'defenders' don't have a billboard of themselves, as it appears they do on the show, Belushi says, "These guys are looking for business. And you know, anything can happen in Vegas!"

Joking aside, Belushi has learned a lot about the legal system in Vegas.

"It's tough. The state of Nevada is a very tough, very conservative state. Again, it has this great feeling of freedom in Vegas. But, if you cross the line, if you get into that court system, they're very conservative," he said. "I mean, think of it: Nevada's done better at putting away California criminals than California. I mean, we couldn't put O.J. away. Nevada did. Paris Hilton met trouble in L.A., And now Nevada's closing in on her. I mean, it's a tough state. You're going to need attorneys, believe me."

There's such great chemistry between Belushi and O'Connell, you'd think they were longtime friends, Chen observed.

"Jerry O'Connell is a ball," Beluishi said. "I met him once. I'd done a commercial with his wife (model/actress Rebecca Romijn), or it was a fantasy sequence, where I was sending her a car and in the fantasy I walk over and kiss her. Then the fantasy breaks. ... When we flew back to Las Vegas together I met him, I think he was a little jealous because I kissed his girl," Belushi kidded.

The two play law partners and buddies, and it's almost like they're brothers.

"Well, we hung out a lot and smoked a lot of cigars and drank a lot of beer right before the show and created a real, natural friendship, and we just carried it right on. It's fun with Jerry," he said.

Audiences are used to seeing Belushi in the half-hour comedy "According to Jim," but now he's transitioning to a one-hour drama. There's some comedy in it, but it's not the same type of acting.

"It's just much closer to the chest playing in a drama," Belushi said. "You know, it's just closer to who you are. In sitcoms, you kind of have to jump up the energy. It's almost doing a farce, you know. So, the energy is different.

There's even buzz that his longtime friend, Dan Aykroyd, might make a guest appearance on the show.

"Yes, he said he'd like to play a judge and came up with an idea. He goes, 'I'll be a judge that you don't get along with, that I never let you win, and you hate me, and then I get busted for solicitation on the strip and then I ask you to represent me," 'he said in an Aykroyd imitation. "And so we just said that's a terrific idea. But he's not available until January."