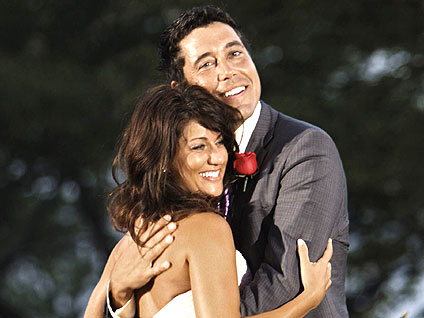 The couple "are taking some time apart to re-evaluate their relationship," according to published reports. This news comes just two weeks after Jake Pavelka and Vienna Girardi announced their separation.

Harris, 29, and Swiderski, 30, got engaged in May 2009 on the ABC reality series and had previously discussed having a 2010 wedding, according to People magazine.

"It feels more normal than any relationship I've ever had," Harris told People three months after the computer software consultant proposed in Hawaii. "When we're together it's very real."

Despite Harris having moved out of Swiderski's one-bedroom Chicago condo and back into her parents' home in Kelowna, British Columbia, in September, the interior designer insisted to OK! magazine that the separation is "not permanent."

"It's not really a 'split' though... We have just been having a tough time, and I needed to go back home," Harris said, according to the report.

The duo managed to survive rumors of Swiderski juggling two girlfriends while wooing Harris on the ABC series, according to the New York Daily News.

"We have great times, and we have sad times. And we definitely have had a couple of trying months," Swiderski wrote on his blog. "But we are real people, so try to think of that before you judge anybody on TV."