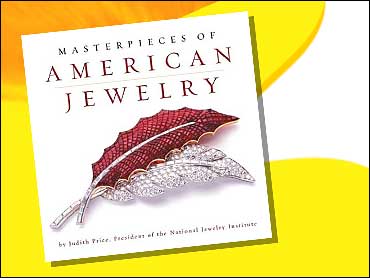 The first museum show of its kind, "Masterpieces of American Jewelry" opens this week. Ralph Esmerian, curator of the exhibit at the American Folk Art Museum in New York, offered a preview on The Early Show of the types of jewels that will be on display.

A companion book for the show, "Masterpieces of American Jewelry" by Judith Price, president of the National Jewelry Institute, will be released Sept. 1, 2004, by Running Press.

"Masterpieces of American Jewelry," the inaugural exhibition of The National Jewelry Institute, will be presented at the American Folk Art Museum from Aug. 20, 2004, through Jan. 23, 2005. This exhibit (the first museum show ever to focus exclusively on America's jewelry legacy) celebrates the unique attributes of American jewelry, its creators, and its innovators.

"Masterpieces" will highlight the creativity and design excellence of American jewelry from its beginnings. The 125 pieces in the show were all manufactured and distributed in America from the late 18th century through the 1980s.

In this exhibit, one will find familiar names like Tiffany and Harry Winston. However, there are many surprises as well, including, Cartier, Van Cleef or Bulgari - at some point in their history, these foreign-based jewelers decided to design, manufacture, and distribute their wares in the United States.

AMERICANA: This genre of jewelry pays tribute to the American spirit, with pieces depicting historical events such as the War of 1812, the suffragette movement, or single American flags as an expression of national pride.

NATURE: Nineteenth-century discoveries in the Middle East and Far East inspired a craze for the exotic, yielding the famous Tiffany orchid brooches, among other jewelry inspired by plants and animals from around the globe.