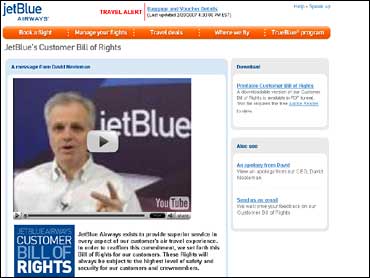 JetBlue Airways, reeling from an operational stumble that has hurt its reputation, printed an apology to customers in a handful of East Coast newspapers on Wednesday.

"We are sorry and embarrassed," the full-page ad began. "But most of all, we are deeply sorry."

The advertisement reiterated what has now become widely known about the crisis that stalled JetBlue over nearly a week following a Valentine's Day ice storm.

"This is especially saddening because JetBlue was founded on the promise of bringing humanity back to air travel, and making the experience of flying happier and easier," the ad said. "We know we failed to deliver on this promise last week."

The advertisement appeared in newspapers in New York, Boston and Washington, D.C., said Bryan Baldwin, a spokesman for the airline. It will be repeated on Thursday in several other cities affected by canceled flights, he said. In total, it will run in 15 cities and 20 newspapers.

"From the outset we've been very upfront about how we made a mistake during the past few days," Baldwin said early Wednesday morning. "We want to make sure our customers know that."

He refused to say how much the advertisement would cost the company.

"This will be an aberration because we are going to make some major changes in the organization so that it doesn't happen again," he said in the video.

On Tuesday, Neeleman announced a customer bill of rights that promises what the company would do in response to future service interruptions, including the use of travel vouchers to compensate for delays.

The airline's meltdown and passenger misery could set off change across the industry, reports CBS News correspondent Sharyn Alfonsi.

Under Jet Blue's Customer Bill of Rights, customers will be compensated with cash. The longer they wait, the more money they get. If a flight is cancelled within 12 hours of departure, they get a full refund. And if a plane is delayed on the ground for five hours, passengers can get off.

"The compensation seems fair and I think it gives JetBlue even more of an incentive to run a good operation than they've had before," said airline analyst Ray Neidl of Calyon Securities. "I would not be surprised if other airlines follow suit, especially if there's pressure from Congress about a bill of rights."

Until then, however, passengers are out of luck, reports Alfonsi.

Six days ago US Airways lost Vernon Duckrey's bag. The only thing that's been harder to find is someone to help.

Duckrey was given a list of numbers to call, and he called "every single one."

"They just don't work. None of them work," Duckrey said.