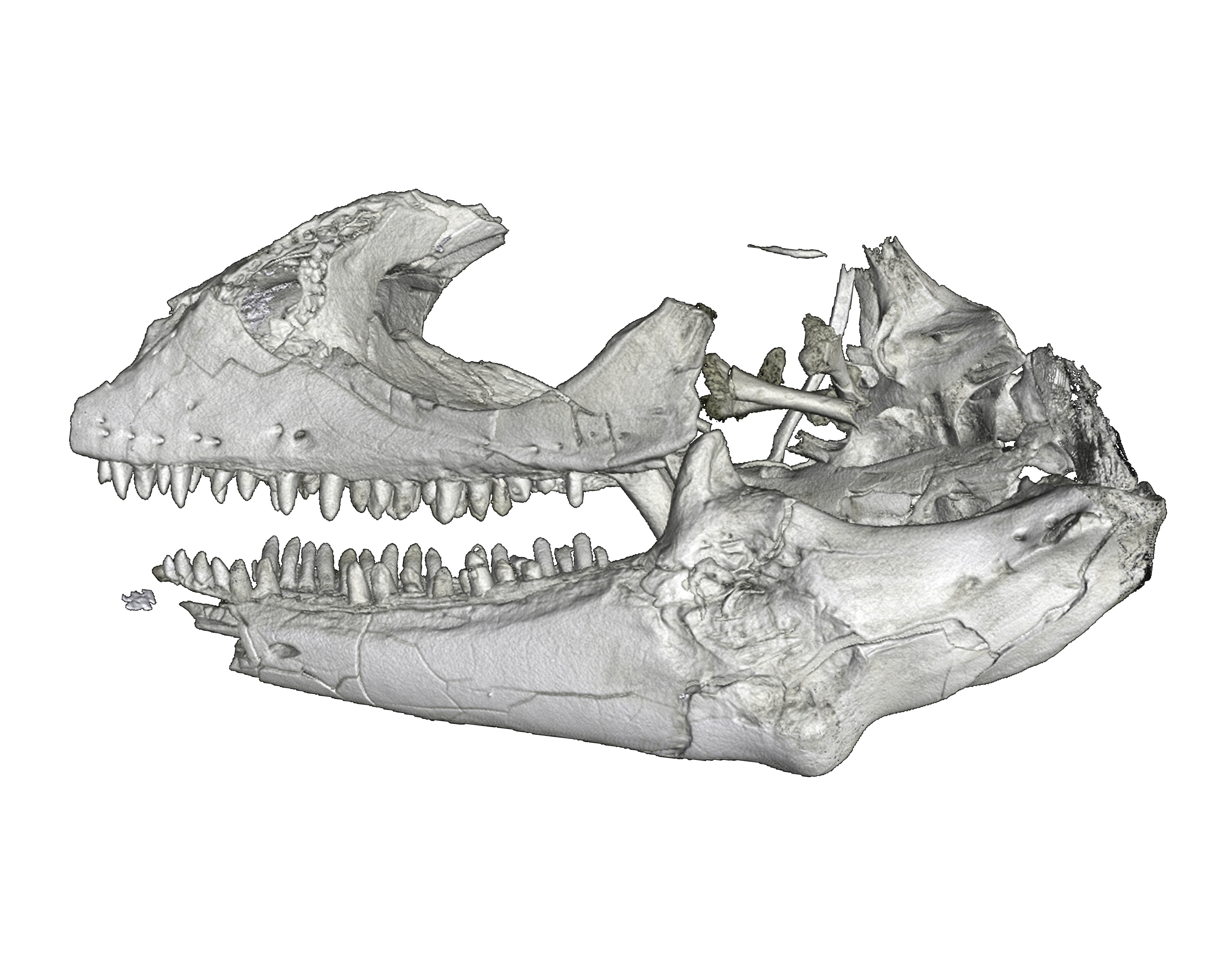 The fossilized remains of a 48-million-year-old lizard that ran across water give a glimpse at a time when parts of the American West were covered with tropical rain forests.

The Babibasiliscus alxi represents the earliest member of what are called the Jesus lizard group, Corytophanidae, for their water-walking abilities. The evolution of this group, which includes iguanas and chameleons, remains poorly understood due to the small number of fossils available for study.

"We don't understand the family tree of this group very well," said Jack Conrad, of the American Museum of Natural History, whose findings appeared Wednesday in the journal PLOS ONE.

"Up until 10 years ago, everyone assumed this group appeared and diversified and spent its entire history in Central America because all nine living species live in Central America and Mexico," he said. "We were able to demonstrate that members of this group were present 48 million years ago in the United States. This group is older than we thought and had a much wider distribution in the past."

Conrad also described in the study a second Jesus lizard that dates back 42 million years, called Geiseltaliellus, which was found in Germany. This demonstrated the lizard's range at one point covered much of the Northern Hemisphere.

Unlike some prehistoric fossils, this two-foot reptile didn't look all that different than its modern relatives. It was about the same size, with long legs and probably had a crest on its head.

Because it looks so similar to modern lizards, it probably also scampered across the water.

Earlier studies, including several from Harvard biologists, have demonstrated that modern lizards run at speeds of about 6 miles an hour across water and can reach distances of about 15 feet. They have mastered a unique slap and stroke gait - the forward foot slapping down to create the force and sweeping back through the water to provide the momentum. The s-stroke also ensures the lizard doesn't tip over.

Conrad said the fossilized lizard skull, which was discovered and collected by scientists at Burke Museum at the University of Washington from a site in southwestern Wyoming near the Utah border, offers few details on how the lizard developed its water walking ability or, in fact, when it first demonstrated it.

But he said the skull does help scientists to better understand how it lived back then. It probably was active during the day and spent much of its time in trees.

"It's very similar to the modern forms. If there is anything distinctive about it, it's that the skull is very strongly built, very robust," he said. "It tells me maybe this thing was eating very large prey items - probably other lizards, maybe some snakes, probably harder-bodied insects."

More than its behavior, Conrad said the discovery of a lizard living in Wyoming so far back is helping scientists better understand what conditions were when temperatures were about 10 degrees warmer.

Unlike the barren badlands found in southwestern Wyoming today, this was much different place. It would have felt more like Southeast Asia, with tropical rain forests filled with ancient cousins of the komodo dragons, crocodiles and boa constrictors. The rain forests gave way to grasslands about 23 million years ago and eventually to the ecosystems found out West today.

Scott Wing, a research scientist and curator in the department of paleobiology at the Smithsonian National Museum of Natural History, said the study provides "another well-shaped stone to a mountain of evidence that the middle and high latitudes were much warmer in the Eocene than they are today, and that as a result, groups of animals and plants we now think of as tropical were much more broadly distributed."

"Paleontologists have described the greenhouse climates of the Mesozoic and early Cenozoic since the 19th century, but the mechanisms that made the world so warm have only begun to be understood in recent decades as a result of improved ability to model climate and a broader array of techniques for reconstructing past climate," he added.

That tropical conditions existed in the past raises the prospect that those out west could be in for some dramatic changes as the temperatures continue to warm in the coming decades due to the increase of greenhouse gas emissions from the burning of fossil fuels.

"I think the study says more about the climate than the lizard itself," Conrad said. "It tells us what we could expect from a slightly warmer planet and tells the story of almost like a greenhouse planet. You could image tropical rainforest extending across the central U.S."

He added, "It makes you wonder if the planet warms just a few degrees now, does that mean we are going to get all these tropical diseases expanding their ranges? Are we going to have worry about malaria in Oklahoma?"