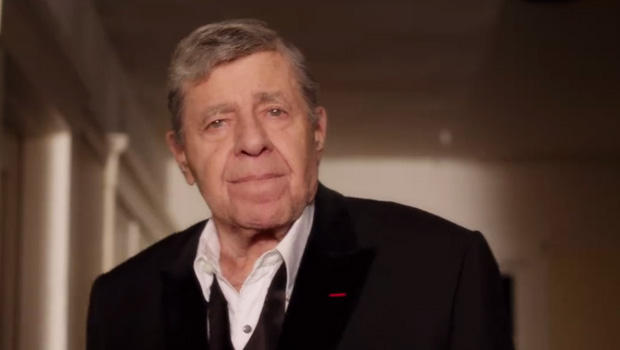 Classic performances in movies like 1963’s “The Nutty Professor” helped make a legend out of Jerry Lewis. He’s 90 now, looking back -- and looking forward -- with Tracy Smith:

So how is Jerry Lewis today?  “I’m good. I’m getting over not walking. It’s rough.”

“It’s got to be hard because you are such a physical comedian,” Smith said.

“Frustrating as hell. But like my daughter said, ‘Dad, would you have liked not to make 90?’ ‘No, I’m very happy about it!’”

He’s a bit less mobile now, but for Lewis, not walking doesn’t mean “not working.”

In his latest film, “Max Rose,” he’s a retired jazz artist coming to terms with his wife’s passing.

In this role, his facial expressions say it all -- then again, they always have. The typewriter scene from 1963’s “Who’s Minding the Store?” is a good example.

Lewis made more than five dozen sight-gag-heavy films -- by himself, and as half of what was once the most popular comedy team on the planet: Martin and Lewis.

“I fell in love with him the day we met,” Lewis said.

Jerry Lewis and Dean Martin first teamed up in post-war New York, and within weeks, they were selling out shows with their own brand of sex appeal and slapstick.

“For you and Dean, it almost seemed like anarchy,” Smith said. “Is that the right way to describe it?”

“Yeah. Pretty good. That’s as good an explanation as I’ve ever heard. “I loved him so much. And I know how much he loved me.  Jesus Christ, I’m telling you stuff I haven’t talked about in 60 years!

“We’re both six feet tall. I took his shoes one day and put lifts on them so that he would be a little taller than me.”

“Because you thought that was better for the bit if you looked younger?”

“Oh, yeah. You can’t do that unless you’re feelin’ it,” he laughed.

But after a nonstop decade together, they weren’t feeling it any more. The two parted ways in 1956, and wouldn’t even speak to each other for nearly 20 years.

“Did you still love each other when you split up?” Smith asked.

Martin, of course, hit new heights on his own ... and Lewis became a top box-office draw.

Under his direction, in films like “The Patsy,” slapstick comedy became performance art.

Lewis, who learned his craft on the fly by watching people on movie sets, wound up teaching a film class to grad students at the University of Southern California.

Among his students: Steven Spielberg. “About 12 guys from a class of 60 made it in ‘the bigs,’ as we called it.”

And in 1960, he made another, lesser-known contribution to filmmaking: Video assist, that is, instant video replay of a movie scene after a take. Today it’s something directors can’t live without. “There should be a sign saying, ‘Jerry Lewis invented this!’” Spielberg once said.

But today, in Lewis’ Las Vegas home, the Oscar that sits atop his TV isn’t for technical achievement or a specific film; it’s the Academy’s humanitarian award, for his other career.

For millions, it just wasn’t Labor Day until Lewis hit his number on the Muscular Dystrophy Telethon, which he hosted from 1966 to 2010. He raised an incredible amount of money during his tenure. “I’ll give you the exact figure,” Lewis said. “$2.7 billion, accounted for.”

The money led to research and longer life spans for MD patients, but it didn’t buy a cure, and at times Lewis could only watch as the disease claimed another of *his* kids.

“The days and hours I spent in hospital hallways waiting for the answer of this child -- was he going to live or die? And I took it very personal,” he said. “’How could he die? Look at the work I’ve done. And what did we do with all that money? Why don’t we use it to help him?’”

“How do you answer that?” Smith asked.

“You don’t. You don’t. Oh, God almighty. I could write a book on children’s reactions to meeting their clown. One child says to the coordinator, ‘If I didn’t get muscular dystrophy I’d a never met him!’ And then these children look at you like you’re some kind of god. I’m not a god; I just love people. And I love people that are well. I don’t like to see someone sick.”

The MDA Telethon had its critics, but it also had its moments -- and one of the greatest happened 40 years ago today:  September 4, 1976, when Frank Sinatra brought out a mystery guest: Dean Martin.

Lewis said he had no idea. “Everybody knew but me.”

Martin and Lewis never did get their old act back together, not even after this:

But they stayed close until Martin died on Christmas Day in 1995.

“You can’t write love off or put it on hold,” Lewis said. “It stays with you until death. And I don’t know it doesn’t continue.”

“Do you still think about Dean now?”

“Oh, sure. There isn’t a day I don’t think about him. And the fact that he left and died, I can’t believe how bad I was [bleep] pissed that he died on me. I knew he would do it!”

He has appearances on the books this year, and beyond. He says his goal is to live a little longer.

In the twilight of an unforgettable life, all Jerry Lewis really wants is a little more.