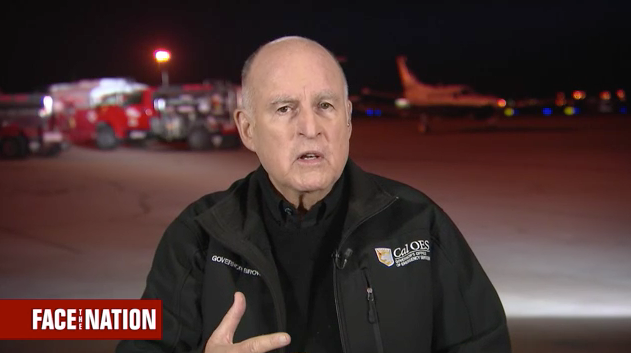 California Gov. Jerry Brown says President Trump assured him he will not cut federal funding to California to deal with the state's deadly wildfires in what the governor called a "big, big win." On Saturday, Brown and the president toured damage from the Camp Fire that killed dozens of people, with nearly 1,300 more still unaccounted for. The governor also said economic impact of the fires will be "tens of billions" of dollars.

"The president not only has signed a presidential declaration giving California substantial funding, but he said and pledged very specifically to continue to help us, that he's got our back," Brown said on "Face the Nation" Sunday. "And I thought that was a very positive thing. "

The positive assessment of the president's visit to the California wildfires comes after some mixed signals from Mr. Trump about the cause of the fires and who is to blame. Last week, Mr. Trump threatened to cut off federal payments to California. "There is no reason for these massive, deadly and costly forest fires in California except that forest management is so poor. Billions of dollars are given each year, with so many lives lost, all because of gross mismanagement of the forests," Mr. Trump tweeted. "Remedy now, or no more Fed payments!" He later approved a federal disaster declaration.

"There have been some back and forth between California leaders and the president. But in the face of tragedy, people tend to rise above some of their lesser propensities," Brown said about Mr. Trump's change of mind.

The governor also said he did not press the issue of climate change during Mr. Trump's visit. The president on Saturday declined to say whether climate change directly impacted the fires, saying there were "a lot of factors" and that seeing the devastation had not changed his opinion on climate change.

"I certainly raised it," Brown said about climate change. "But I didn't feel that that was where we needed to go. We need the money, we need federal help and we need a collaborative and cooperative spirit and we're getting that. But I did say that we're going to look at all the elements that are causing these fires over time and we're going to work in a way to let science be our guide, and the president in no way negated that. So I decided to go for an opening and I think over the next months and years you'll see the science becoming crystal clear, and even the folks in Washington that are now more in the denialist camp are going to come around."

On Saturday, the president incorrectly suggested forest management in the state was largely controlled by the state's government, when it's the federal government that owns more than 60 percent of the land in the state.

According to Climate Nexus, climate change amplifies the threat of wildfires by creating ideal settings for them to burn. Climate change is affecting conditions in both our summers and winters in ways that contribute to wildfires.

Brown also told "Face the Nation" the "economic impact is devastating" and is going to "cost tens of billions."

"The devastation is at the human level, is horrific and hard to find words to describe," Brown said. "And economically, yes, this is going to cost tens of billions. That's what it's going to cost before we get finished."