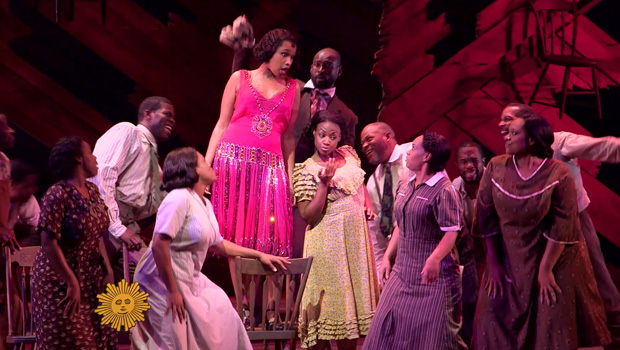 Jennifer Hudson's rendition of the song "And I'm Telling You I'm Not Going" was a highpoint of the 2006 film, "DreamGirls." Now she's about to open on Broadway. Here's Anthony Mason:

In a Manhattan rehearsal hall, Jennifer Hudson is preparing for one of the biggest roles of her career: the part of Shug Avery in the revival of the musical "The Color Purple." The 34-year-old singer has won an Oscar and a Grammy, but her last theatrical role was on a Disney cruise ship more than a decade ago.

"It's my first Broadway show," she laughed nervously.


Last month, she made her first visit to the stage at the Bernard Jacobs Theatre.

Mason noted, "It's funny, the stage, when you're up here, doesn't look that big."

"No. And you think like, wow, all of that is gonna happen on this little stage?" Hudson said. "You know, It's so exciting, I wanna sing in here right now!"

Previews for "The Color Purple" began this past week. Hudson opens on Broadway next month.

"My first trip to New York was when I was coming to do the news for being eliminated from 'American Idol,'" she said. "And then to fast-forward all the way to here now, it's like full circle in so many different ways."

She was 23 when she made the finals of "American Idol" in 2004. It was before her dramatic weight loss, and judges criticized her wardrobe. She finished seventh.

Two years later, she beat out more than 700 other actresses to win the role of Effie White in "Dreamgirls," the lead singer of a girl group who's replaced by a more camera-ready rival.

In her first film, she starred opposite Beyonce and Jamie Foxx. "You're walking into a film with a pretty imposing cast," said Mason, "and you've never acted before?"

"No," she said. "And I'm sitting there between them and I'm like, 'Oh, my God.' And it's like, you know what? They had a first start, too. They had to start somewhere. I love y'all. But this is MY first start. Excuse me, I got a job to do!"

And she did it. Her performance of "And I'm Telling You I'm Not Going" in her climactic scene became an immediate film classic.

"Every tear I cried in that scene was a real tear. It came from somewhere. And I was, like, put it in this moment."

It earned Hudson an armful of hardware: an Oscar, a Golden Globe, a BAFTA, a BET Award, a Screen Actors Guild Award ...

The awards live in the home she shares with her longtime fiance, wrestler David Otunga, and their son, David Jr., in the suburbs of Chicago.

"I feel like this keeps me grounded, centered, definitely," Hudson said.

Growing up on Chicago's South Side, the center of life for Hudson was the Pleasant Gift Baptist Church. It was the first place she sang publicly.

From the beginning, the family knew she had a gift. The first time she stood up to sing was when she was seven: "I stood right there and I sang, 'Must Jesus Bear The Cross Alone?'"

Hudson's maternal grandmother, Julia, who was a church soloist, was also her coach. "She used to do a solo -- 'What kind of man is this? Why he looks, he looks like, Jesus' -- and she used to make these faces, and as kids we used to sit and laugh! She was very expressive."

"You hear her sometimes in your own voice? When you hear her coming out of you?"

"It was something, like, special, like we treasured her gift. I was just singing the other day -- 'Know that there's a God above' -- When I say a God, that's how she would have phrased it."

Hudson's voice, arguably the best of her generation, won her a Grammy for her debut album in 2008. But the honor that years would be eclipsed by a violent family tragedy, when her mother, Darnell, her 29-year-old brother, Jason, and her seven-year-old nephew, Julian King, were all murdered by her sister's estranged husband.

"How do you even begin to process that?" Mason asked.

"I don't think you can. It's one of those things where it comes in flashes."

"And what do you do when it comes?"

"I try to allow myself to let it do, be, bring whatever it brings. Because it's too much. And when it's more than one person, you don't know who to grieve for first, or how. So when it comes, it comes."

"Do you still have conversations with your Mom in your head?"

"You strike me in some ways as pretty fearless about certain things."

"But how did you get through the trial that year?"

"That, I think, was the toughest thing ever," she said.

She testified, and went to court every day. "I remember God came to me, like, right when everything happened, 'cause I was like, 'What do I do?' And He said, 'I want you to get up and keep going.'

With her sister, Julia, she set up a charity in her nephew's name to provide school supplies to kids. And next month, Hudson will star in "Chi-raq," Spike Lee's new film about violence in Chicago.

"I play a mother who has a slain little girl that was caught [by] a stray bullet going to school."

On the set, Lee applauded her courage in taking the part: "This is really personal for her," he said. "And you can see it when she was before the camera. So on behalf of everybody, I know it was rough. Thank you!"

It's been a notable year for Jennifer Hudson: A new film, a Broadway debut, and a performance at a service for Pope Francis at Madison Square Garden.

At the church Mason asked, "What was it like singing for the Pope?"

"It sent me back in flashes of so many things," she said. "And I couldn't help but think of my Mom, my grandmother, my church family, all my family, like, 'Wow!' It's definitely one of those moments when it's like, you wished they were there."

"It's so cool!" Hudson laughed. "It's so cool. But it's interesting, 'cause I feel the energies of everyone that's --"

"Yeah. It's overwhelming. Almost like, Whoo. It's a good feeling, though. It's a great feeling. Yeah. Yup, this is home."

To watch Jennifer Hudson and Cynthia Erivo perform "The Color Purple" from the Broadway revival, click on the player below.