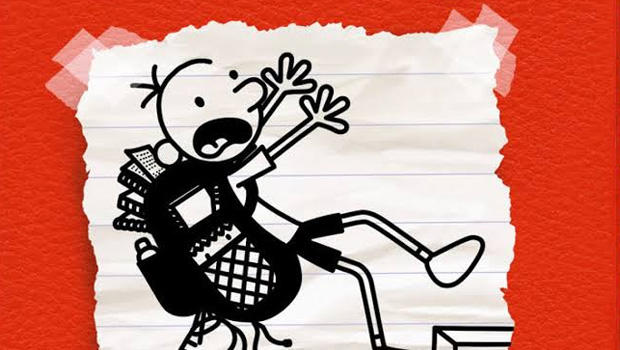 “Diary of a Wimpy Kid,” the popular book series about the awkward and sometimes sneaky middle-schooler Greg Heffley, has sold more than 180 million print copies worldwide. Author Jeff Kinney, who writes and illustrates the children’s books, has earned the number two spot on the 2016 Forbes Highest Paid Authors list.

The 11th book in the series, “Diary of a Wimpy Kid: Double Down” (Amulet), hits bookstore shelves Tuesday.

So, is Greg Heffley actually Kinney? “I think I’m Greg, but sort of a tortured, twisted version,” Kinney said. “Actually, he is a twisted, tortured version of me. He’s an exaggerated form of my worst parts, I think.”

“CBS This Morning” co-anchor Gayle King described the books’ star as “sarcastic, but not a wise-ass, which I think is really fun to read.”

“I think Greg is just a normal kid,” said Kinney. “He’s got plenty of flaws. Maybe he is less flawed than I was as a kid. I’m really trying to look at childhood from every possible angle, and Greg is the avatar. He is the guy who is representing all kids in my mind.”

Kinney said that when he was working on his first book of the series, “I was reading ‘Harry Potter,’ and I realized that Harry Potter is a underdog, but he’s really not in some ways. He is brave, he is famous, he’s magical, he is powerful. He’s a good athlete at quidditch. I was like, ‘I wasn’t any of those things. I was just a normal kid.’ So Greg is the anti-Harry Potter in some ways.”

He told co-anchor Norah O’Donnell that he always saw his future in cartooning, but his first “Wimpy Kid” book was originally aimed at an adult audience.

“When I was a kid, I read comic books and comic strips that my father put in front of me, so I always thought that I would be a cartoonist,” he said. “And then when I wrote ‘Diary of a Wimpy Kid,’ I thought I was writing for my father, somebody who wanted to look back on his childhood. My editor said, ‘You know what? We think you’ve written a children’s series.’”

Kinney admitted that he was originally “frustrated” that he didn’t become the newspaper cartoonist he’d originally dreamed of, “but I think this is a better dream. The fact that I’m here with you today, I don’t think that would have happened if I had had newspaper comics printed.”

Among his young readers, he finds that kids with autism or dyslexia have really taken to the books. “I think that what it is, is that these pictures in the books, they give the kids little islands to swim to, and the pictures provide context.”

He is currently on his first global book tour, which began last year. “We went to Brazil, China, Australia, Latvia, Romania, and this year we’re going to India, Korea, Israel.”

Readers around the world have responded to the books, which are currently available in more than 40 languages (including Latin!).

“What is it about this book that’s about, really, an American kid?” he said. “I think it’s that childhood is a universal condition, really. Most kids have parents and siblings and pets and homework and teachers. These are the stories of childhood.”

Kinney and his wife have opened their own bookstore in Plainville, Mass., An Unlikely Story, “because we wanted something really nice in the middle of our community,” he said. “Each week we have nationally- or internationally-known authors visiting us, and it’s extremely edifying. Our lives are really enriched and the greater community is also very enriched.”

And coming up: a fourth “Diary of Wimpy Kid” movie, based on “The Long Haul,” and next year an animated television series. “It’s really an exciting world,” Kinney said.

Update: After his appearance on “CBS This Morning,” Kinney began a global tour in North America, Europe and Asia to promote the release of his book. He invites you to share in the excitement of the powerful and lasting impact a book can have on a child’s life: