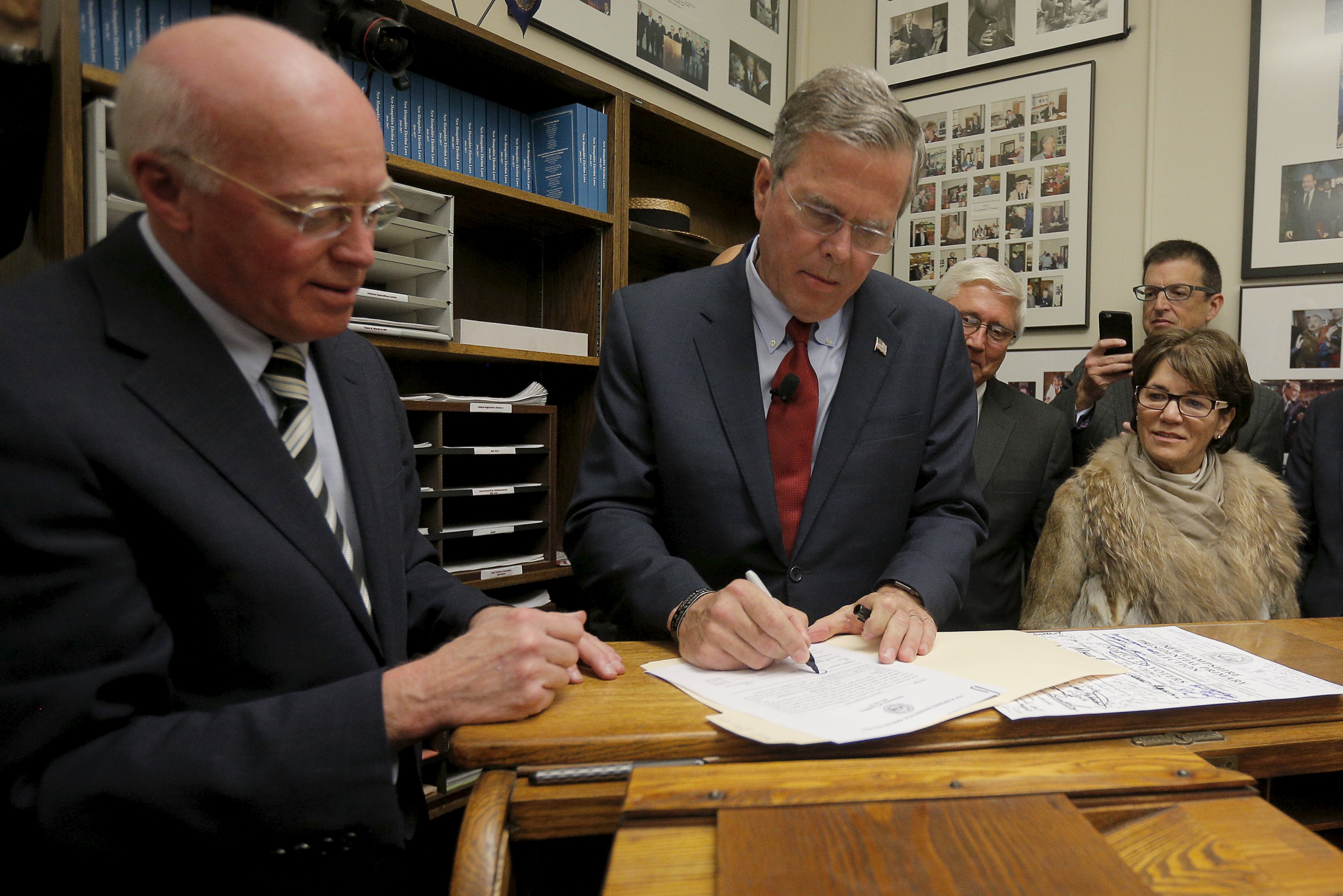 CONCORD -- Breaking with many of his fellow Republicans, Jeb Bush said Thursday that the United States should be supportive of Syrian refugees rather than prevent them from entering the country -- provided that the Obama administration can effectively screen refugees.

"I do believe that we should be supportive of refugees but I think we need to push the pause button right now until the administration can convince the Governors," Bush told reporters at the Concord State house on Thursday after he filed his official paperwork to appear on the New Hampshire ballot.

"I agree that Governor Scott has legitimate concerns and all the other governors do that brought it up. By the way this isn't only Republicans, Democrats are concerned about this as well. They should be. Unlike other refugees that have come, you have the possibility at least of terrorists organization to disrupt our way of life and attack us and to kill people that could be embedded in refugees," Bush said.

When pressed on Obama's position that religious tests for those fleeing from a war-torn country are "shameful" and un-American, Bush argued that the law already requires a religious test for refugees, that "as you go through the screening process, religion is an element to it."

"Everybody should go through the same screening process," Bush told the New Hampshire press-corps at Secretary of State Bill Gardner's roundtable. "But I can tell you that a persecuted Christian, a Christian family that has been uprooted in their community, whether it's in Iraq or Syria, whose family members have been beheaded because of their faith -- they're not Islamic terrorists."

Bush also told the New Hampshire Union Leader that Obama was "delusional" and said he found it offensive that the President had criticized him for focusing on "the fact there is an effort underway in the Middle East to destroy Christianity, to destroy Christians."

On the second-to-last day of New Hampshire's presidential filing period, Bush seemed overjoyed to become the fifth member of the Bush family to make a trip to Gardner's state house office -- and the third Bush to make his presidential bid official in New Hampshire.

First it was then-Vice President George H.W. Bush who filed in 1988, followed by Barbara Bush who filed on behalf of her incumbent president husband in 1992. In 2000, George W. Bush made the trip himself; he sent his sister Dorothy to file for him in 2004. The Florida Governor was the 5th Bush to complete the presidential right of passage today.

"When George W. came in and looked up at that collage up there," Gardner told CBS News, pointing to the photos of presidential candidates of past cycles that pepper his office walls, "He asked me to come over and when I did, he had his finger on his father. He said "I'm looking at my father and he's the exact same age in that photo that I am right now and look how much younger he looks than I do!" That's what he said to me and it was true!"

After making his way through the hallway of the New Hampshire state house to supporters chanting "Go, Jeb, go," Gardner had the opportunity to show those same photos to yet another Bush, pointing out the faded memories on the wall of his brother and father's filings.

Bush handed over his $1,000 dollar check and signed his filing papers, ending one trip down memory lane before being deluged with questions from the press in the adjoining room about the fight against the Islamic State.

He was asked whether America was safer with Saddam Hussein in Iraq or ISIS in the Middle East, "Neither -- to be honest with you," Bush shot back. "ISIS is the current threat. We can have a history lesson if you'd like or we can focus on the fact that I'm running for president of the United States to be president in 2017, and my first responsibility is to focus on the future. ISIS is the threat to our country and to the world."

Reporters also queried about frontrunner Donald Trump's pronouncements of Bush's demise from the previous night, to which Bush responded, "Check in February."

"I'm gonna run hard, I'll let the pundits use their punditry," Bush told the group. "If you follow me around on the campaign trail, you'd get a good sense that I'm pretty all in on this and all the punditry, process questions, I'll let you talk amongst yourself about that. That's not my job," before telling reporters he was looking forward to seeing their "big smiles" on the trail.

Gardner confirmed that he had also received former Arkansas Governor Mike Huckabee's check in the mail, officially putting him on the New Hampshire ballot. Former New York Governor George Pataki filed after Bush, saying that he had no intention of dropping out soon.

"The encouragement I get from people has overcome the doubts I get from the polling so I'm in it," Pataki told reporters around Gardner's round table. "Fight the fight, I'm not going to stop. I'm looking forward to meeting a lot more people in new Hampshire and around the country.

"The last day is more festive," Gardner told reporters on Thursday. "We had this person who came in once on the last day who brought in something to sit on and she just wouldn't leave. Someone else came in and just sat down on the floor, playing the guitar."