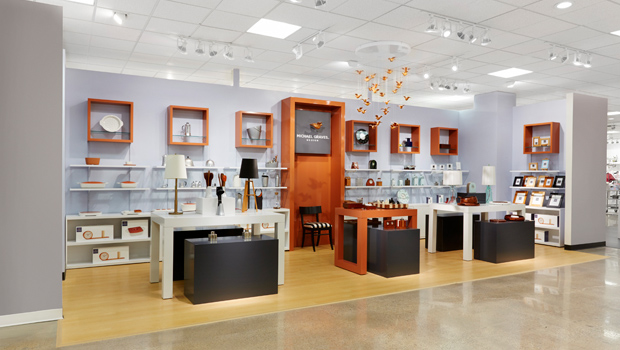 NEW YORK J.C. Penney (JCP) is honing in on its home department as part of a bigger plan to turn its stores into mini-malls of sorts.

The struggling department-store chain is unveiling revamped home areas within its stores that feature 20 boutiques that highlight 50 new brands. The areas will include an eclectic mix of items, from $60 Michael Graves' stainless steel teakettles to $1,850 Jonathan Adler "Happy Chic" sofas.

The home areas, which Penney will begin to roll out Friday at 500 of its 1,100 stores, are big tests of CEO Ron Johnson's plan to open separate shops-within-stores for popular designers. The format, which gives department stores more of a mini-mall feel, have been popular at higher-end rivals such as Macy's and Bloomingdale's for years.

Penney hopes the new home areas will help it woo back shoppers as it struggles to rebound after it lost a quarter of its revenue and amassed nearly $1 billion in losses in the past year. The revamp certainly presents a big opportunity for the retailer.

While home sections typically are among the least profitable of a department store, they help to drive customers into the store. And demand for home furnishings is rebounding along with the U.S. housing market: Sales of furniture and home decor reached $92.9 billion last year, up 7.8 percent from the low of $86.2 billion in 2009 during the recession, according to spending tracker MasterCard (MA) Advisors' SpendingPulse.

"It's going to be a struggle, but the home area could generate some momentum," says Walter Loeb, a New York-based independent retail consultant.

But Penney, based in Plano Texas, has its work cut out for it. Penney was planning to anchor its home areas with the Martha Stewart lifestyle brand. But the company is fighting in court with Macy's over whether Macy's has exclusive rights to sell certain Martha Stewart products like bedding, cookware and bath items.

Adding to that, Penney's home business has lost considerable cache from its heyday. The business once accounted for nearly 20 percent of Penney's total store sales, but that number has dropped to 10 percent as the assortments have failed to attract the younger customers who update their homes more often than their older counterparts. In fact, Penney says that its home department, which had attracted an average age of 45, has the oldest shopper compared with rivals like Target (TGT) and Macy's (M).

Penney executives say the new sections will appeal to a broader group of customers. About 70 percent of the merchandise in the new home area will be new or retooled brands. To make room for the new labels, Penney got rid of long-standing names, including traditional home furnishing brand Chris Madden.

Each shop-within-a-store will have its own distinct look and will range in size from 300 to about 800 square feet. Among the new shops within the stores will be Bodum, a Denmark-based kitchenware company. Jonathan Adler, known for his whimsical designs in home decor, also will have a shop. And Michael Graves, the architect turned home designer, will showcase his minimalist style in kitchen and home accessories in mini boutiques.

"There's something for everyone at any stage of their lives," says Paul Rutenis, senior vice president and general merchandise manager for Penney's home business.

Designer Jonathan Adler says the shops will appeal to a broader audience beyond the high-end collection that's sold at his own stores and in upscale retailers. Adler says the offerings for Penney will focus on brighter colors and is "more playful" than his upscale collection.

Adler's exclusive "Happy Chic" shops will feature bright blue comforters with geometrically-patterned pillows that sell for as much as half of Adler's higher-end line. For example, "Happy Chic" sofas are $1,850 at Penney, compared with $4,000 for the signature collection.

For designer Michael Graves, the relationship with Johnson has come full circle. In 1999, Johnson, then a Target executive, brought Graves' affordable housewares to the Target - the first time that an upscale designer's products were sold at a discount store. But Graves, who has sold about 2,000 different products over his 13-year run at Target, says his products were never housed in their own shop.

The Michael Graves shops for Penney will have about 150 different items ranging from $8 wooden spatulas to $190 standing lamps. Graves says the quality of his items in Penney's stores is higher than the items he once sold at Target: A teakettle at Target, for instance, sold for $39 and was plastic, but Graves says the $60 Penney version is stainless steel.

As for Penney's future, Graves says he's focusing on what Penney will become.

"I'm not at all worried," he says. "The change is going on. People will have to be patient."