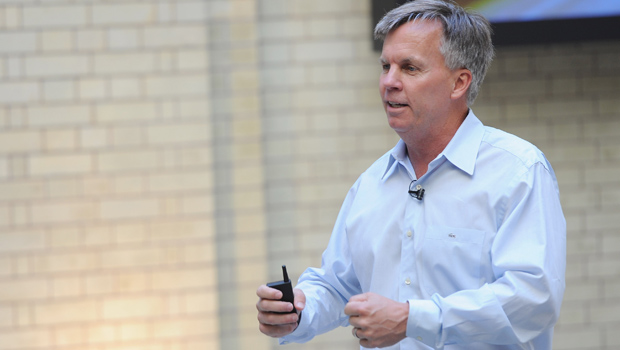 NEW YORK J.C. Penney (JCP) CEO Ron Johnson is out at the company, and former chief executive Myron "Mike" Ullman is in at the struggling department store chain.

Ullman was head of J.C. Penney, based in Plano, Texas, prior to Johnson's appointment to the top spot in 2011. Johnson, formerly a top executive at Apple (AAPL) and at Target (TGT), had been brought in to halt the department store chain's sliding earnings. Under Johnson's leadership, J.C. Penney implemented a strategy that included replacing coupons and most of its sales events with "everyday low prices," which brought in new brands and renovated outdated stores.

The company announced the change in a regulatory filing Monday.

"While J.C. Penney has faced a difficult period, its legacy as a leader in American retailing is an asset that can be built upon and leveraged," Ullman said in a statement. "To that end, my plan is to immediately engage with the company's customers, team members, vendors and shareholders to understand their needs, views and insights."

Penney reported dismal fourth-quarter results in late February that capped the first full year of a transformation plan where Penney amassed nearly a billion dollars in losses and its revenue tumbled almost 25 percent to $12.98 billion.

In one of the biggest signs of the board's disapproval of Johnson's performance, Johnson saw his 2012 compensation package plummet nearly 97 percent to about $1.9 million without a sizeable stock award he got last year and no bonuses, according to a filing last week.

Meanwhile, in another blow to Johnson's turnaround strategy, Vornado Realty Trust, one of Penney's biggest shareholders, sold more than 40 percent of its stake in the company last month. The company's chairman CEO Steve Roth sits on Penney's board.

Penney shares which had originally risen in after-hours trading on media reports that Johnson had been ousted, reversed course falling $1.54, or 9.7 percent, to $14.33.