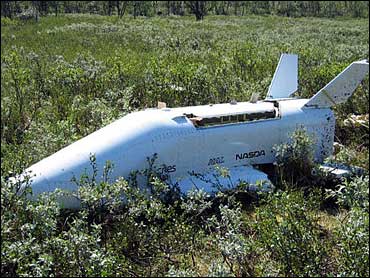 Japan's delta-wing space shuttle approached the speed of sound while cruising over Sweden, but tumbled into a field moments later - a crash landing that was the latest setback for Japan's space program.

The shuttle, an unmanned craft only 12.5-feet long, took flight Tuesday, lifted by a stratospheric balloon 13 miles above a test site in northern Sweden.

The shuttle was then released and hit speeds up to Mach 0.8 during its 5-minute plunge. Scientists at Japan's National Space Development Agency monitored the flight for data on high-speed acceleration and aerodynamics.

But as the shuttle barreled toward Earth, two of the craft's three parachutes failed to open properly and the craft crashed into a field, breaking its left wing and nose cone.

"From a scientific perspective, it was a success because we collected the data we were looking for," space agency spokesman Hiroaki Sato said Wednesday. "But because of the landing, we are unsure if we can continue the test flights."

Two more test flights had been planned in Sweden, each faster than the last.

Japan's space shuttle is not expected to be a competitor to NASA's craft. The U.S. program was suspended this year when the shuttle Columbia disintegrated upon re-entry, killing its seven crew members.

Besides being much smaller and unmanned, the Japanese system is the prototype for a program - the Hope-X project - that was recently put on ice because of budget cuts.

Hope-X, started in the 1980s to develop a reusable unmanned space shuttle, was originally slated for launch in 2004. But lack of funds pushed it four years behind schedule before it was postponed.

The Japanese space agency has not said whether the Hope-X might be resurrected, but said Tuesday's flight was intended to gather data for future projects.

Japan budgeted $22.4 million for two rounds of tests on the shuttle, those in Sweden and an earlier one on Christmas Island in the Pacific Ocean that was largely successful.

Japan has sent an unmanned probe into lunar orbit and recently unveiled plans for a joint European mission that would be the first to land a probe on Mercury. The country is struggling to compete in the commercial satellite launching market and has suffered a checkered record of technical successes and failures.

Japan's Mars-bound probe is years behind schedule, low on fuel and might not reach the planet. A February launch of Japan's H-2A rocket ended in failure with one of the probes lost in space. The project got a boost a month later, when Japan successfully launched its first spy satellites.