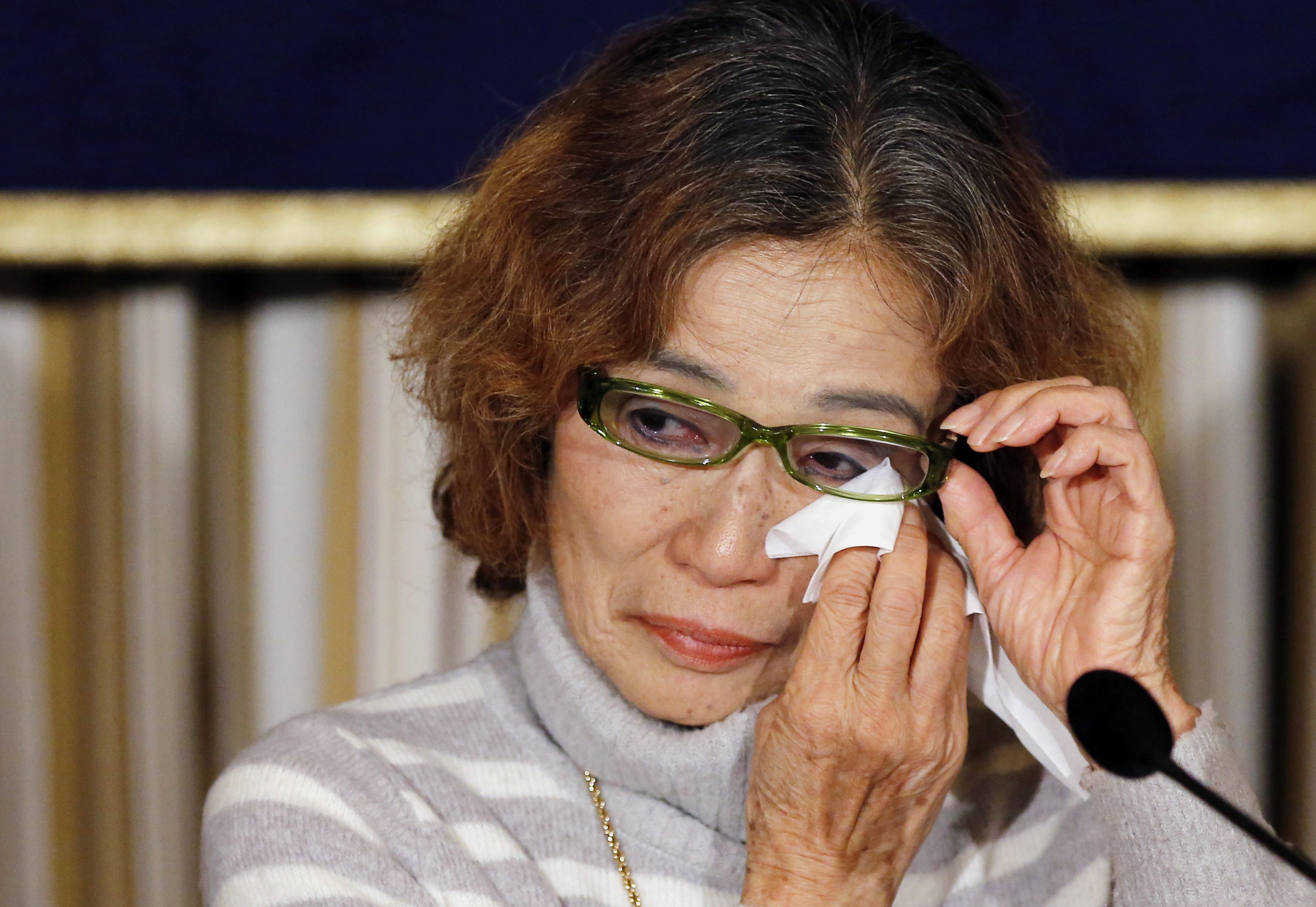 TOKYO -- The mother of a Japanese hostage held by extremists from the Islamic State of Iraq and Syria (ISIS) has appealed publicly to Prime Minister Shinzo Abe to save her son after his captors issued what they said was a final death threat.

Junko Ishido, mother of freelance reporter Kenji Goto, tearfully read to reporters her plea to Abe to "Please save Kenji," which she said she sent earlier Wednesday.

She begged Abe to work with the Jordanian government to try to save Goto, saying, "Kenji has only a little time left."

Abe earlier expressed outrage at the latest threat purportedly from ISIS to kill the Japanese journalist, as secret talks in Jordan sought his release and that of a Jordanian pilot also being held hostage.

The effort to free Goto and Jordanian Lt. Mu'ath al-Kaseasbeh gained urgency with the release of an apparent ultimatum late Tuesday from ISIS.

In the message, the extremists say the two hostages will be killed within 24 hours - late Wednesday night Japan time - unless Jordan frees Sajida al-Rishawi, an Iraqi woman sentenced to death in Jordan for her involvement in a 2005 terrorist attack on a hotel that killed 60 people.

"This was an extremely despicable act and we feel strong indignation. We strongly condemn that," Abe said. "While this is a tough situation, we remain unchanged in our stance of seeking help from the Jordanian government in securing the early release of Mr. Goto."

A government spokesman, asked about the message, said there was no reason to believe the video was not authentic.

"I think the Jordanian government would respond on their own," said Katsunobu Kato, a deputy chief cabinet secretary.

In Jordan, the pilot's father, Safi al-Kaseasbeh, beseeched the government "to meet the demands" of ISIS.

"All people must know, from the head of the regime to everybody else, that the safety of Mu'ath means the stability of Jordan, and the death of Mu'ath means chaos in Jordan," he told The Associated Press.

About 200 of the pilot's relatives protested outside the prime minister's office in the Jordanian capital of Amman, chanting anti-government slogans and urging that it meet the captors' demands.

A member of Jordan's parliament said the country was in indirect talks with the militants to secure the hostages' release. Bassam Al-Manasseer, chairman of the foreign affairs committee, told Bloomberg News the negotiations are taking place through religious and tribal leaders in Iraq, adding that Jordan and Japan won't negotiate directly with ISIS and won't free al-Rishawi in exchange for Goto only.

A prisoner exchange would be contrary to the policy of Jordan's main ally, the United States, which opposes negotiating with extremists. Manaseer's comments were the strongest suggestion yet that Japan and Jordan might be open to a prisoner exchange.

Japanese Deputy Foreign Minister Yasuhide Nakayama was in Amman to coordinate hostage-release efforts with Jordan, but refused comment on details of the talks early Wednesday.

Goto's mother expressed hope for his release, but also desperation.

"What has my child done wrong?" she said. "There's no more time."

The militants reportedly have beheaded one Japanese hostage, Haruna Yukawa, and the crisis has stunned Japan.

Although many in Japan are critical of the two men for going to Syria, Goto's friends and supporters have launched a social media campaign calling for his release.

The Committee to Protect Journalists has protested his plight, demanding his release.

In the group's blog, Henry Tricks, a correspondent for The Economist who met Goto while working in Japan, said the independent journalist "covers wars with a difference."

"Instead of focusing on who is winning or losing, he tells the stories of ordinary people, especially children, who are forced to endure conflict and the horrors surrounding them," he writes.

Tuesday's video resembled a message released over the weekend showing a still photo of Goto holding what appeared to be a photo of Yukawa's body. It withdrew a demand for $200 million in ransom for Goto and Yukawa made in an earlier message.

The latest message condemns Jordan for not releasing al-Rishawi, saying that unless she is freed within 24 hours, the pilot, followed by Goto, will be killed. It says it is the group's last message.

"I have only 24 hours left to live and the pilot has even less," says the audio, purportedly from Goto.

Messages from other Western hostages held by the group have been read by the captives on camera and it is unclear why the group released only a recording and still picture.

Mu'ath al-Kaseasbeh, 26, was seized after his Jordanian F-16 crashed near the Islamic State group's de facto capital of Raqqa in December. He is the first foreign military pilot they have captured since a U.S.-led coalition that includes Jordan began its aerial campaign against the Islamic State group in August.

This is the first time that the group has publicly demanded the release of prisoners in exchange for hostages. Previous captives may have been released in exchange for ransom, although the governments involved have refused to confirm any payments were made.

Goto, a freelance journalist, was caught in October in Syria, apparently while trying to rescue Yukawa, 42, who was taken hostage last summer.

Securing the release of al-Rishawi would be a major propaganda coup for ISIS and would enable the group to reaffirm its links to al Qaeda in Iraq.

The mother of another Jordanian prisoner, Ziad al-Karboli, said her family was told the Islamic State group also wants his release as part of a swap, but it is unclear if that was related to a possible deal involving the Japanese hostage.

Al-Karboli, an aide to a former al Qaeda leader in Iraq, was sentenced to death in 2008 for killing a Jordanian citizen.