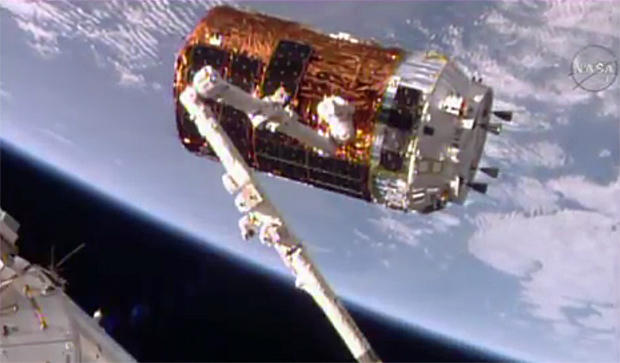 Expedition 50 commander Shane Kimbrough and European Space Agency astronaut Thomas Pesquet, operating the station’s robot arm, locked onto a grapple fixture on the side of the HTV-6 supply ship at 5:37 a.m. EST (GMT-5) as the two spacecraft sailed 250 miles above southern Chile.

“Houston, station, we see a good capture of the HTV,” Pesquet radioed after the arm locked on.

Flight controllers at the Johnson Space Center in Houston then took over arm operations and pulled the spacecraft in for berthing at the Earth-facing port of the station’s forward Harmony module. Once precisely aligned, 16 motorized bolts in the common berthing mechanism drove home to firmly lock the HTV in place. Berthing was completed at 8:57 a.m.

“It has about four-and-a-half tons of supplies for us, which we’re really excited about,” Kimbrough said after capture. “We were talking last night and thought it was really cool ... when you have a NASA astronaut and a European Space Agency astronaut using the Canadian robotic arm grabbing a Japanese vehicle and attaching it to the U.S. side of the space station. That’s pretty cool.”

The HTV, the sixth supplied by the Japan Aerospace Exploration Agency, or JAXA, features a pressurized compartment that the astronauts can access from inside the space station and an unpressurized cargo bay for exterior equipment that can be extracted by the robot arm.

Mounted on a pallet in the unpressurized cargo bay are six 550-pound lithium-ion batteries that will replace 12 aging nickel-hydrogen power packs in one of the station’s four sets of solar arrays. Three more sets of batteries that will be ferried up on future HTV flights.

The pallet carrying the first set will be pulled out of the HTV’s unpressurized cargo bay by the robot arm and moved to the right side of the station’s power truss later this month. Starting New Year’s Eve, the batteries will be robotically installed at the base of the inboard starboard 4, or S4, set of arrays, which feed two of the station’s eight power channels.

Two spacewalks will be required to complete the swap out. Kimbrough and astronaut Peggy Whitson will carry out the first EVA on Jan. 6 to service one of the two power channels while Kimbrough and Pesquet will service the second during a Jan. 13 spacewalk.

Nine of the 12 older batteries will be attached to the cargo pallet as the replacements are installed. When the work is complete, the pallet then will be moved back into the HTV-6 spacecraft. The retired batteries will burn up along with the HTV when the cargo ship, loaded with station trash and other no-longer-needed equipment, plunges back into the atmosphere in late January.

The remaining three nickel-hydrogen batteries will be attached to “adapter plates” beside the new batteries at the base of the S4 arrays where they will remain in long-term storage. The adapter plates will be installed during the upcoming spacewalks.

“Based on a lot of the equipment that’s brought up, we’re going to see a lot of robotics and spacewalk activity coming up in the next few weeks, and it’s going to be really exciting,” Kimbrough said. “The vehicle has the new lithium-ion batteries that are going to get installed on the outside of the space station to improve our power system.”

“Again, congrats to our JAXA partners and other members of our international partnership on this really impressive achievement,” he said. “The vehicle is beautiful, and it performed flawlessly.”