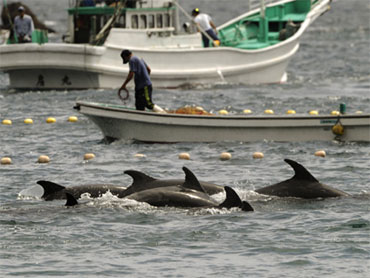 TOKYO -- The fishing town of Taiji will not stop its dolphin hunts, the mayor said Thursday, after Japan's aquariums decided to stop buying captured dolphins under international pressure sparked by cruelty concerns.

"We are hunting under the permission of the Japanese government and prefecture, and so we will continue to protect our fishermen and the methods. We will not quit," said Kazutaka Sangen, mayor of the small town in central Japan.

In Taiji's hunt, notoriously filmed in the Oscar-winning documentary "The Cove," dolphins are scared with banging, herded into a cove and speared by fishermen for their meat. The best-looking animals are sold to aquariums and marine shows for thousands of dollars each.

"WAZA gave in to the anti-whaling activists that turned dolphin hunting into an international problem. I believe there was a better way to handle the issue," he told reporters.

Even if all of the Japanese group's 63 member aquariums and 89 zoos stop buying Taiji dolphins, they could be sold in other places, including overseas marine parks. Taiji also runs its own aquarium.

WAZA has more than 1,000 members and has talked with the Japanese aquarium group about the Taiji hunt for more than a decade.

The campaign against the Taiji hunt has drawn Hollywood stars as well as the anti-whaling activist group Sea Shepherd. "The Cove," which won an Academy Award in 2009, focuses on Ric O'Barry, who trained dolphins for the 1960s "Flipper" TV series before deciding to devote his life to protecting them.