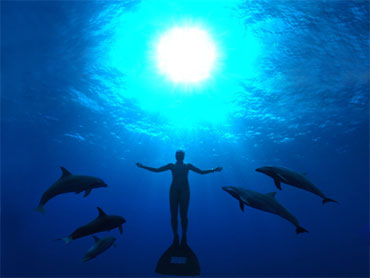 First comes the noise: a systematic banging of metal poles underwater, a wall of sound that frightens the dolphins and sends them scurrying in the opposite direction.

Then comes the capture: Japanese fisherman drive these dolphins into a hidden cove, ensnaring them in their nets before deciding which should be sold to marine parks and which should be slaughtered for their meat.

Last comes the kill: They spear the creatures, haul them into their boats and take off, motoring through the bloody water, leaving behind what looks like a punchbowl of death.

This process is depicted in gruesome detail in "The Cove," a documentary that mixes advocacy journalism with the suspenseful thrill of a caper.

Director Louie Psihoyos, former dolphin trainer Ric O'Barry and a team of divers and tech experts infiltrated this heavily protected cove in the coastal Japanese town of Taiji. Their aim was to expose the clandestine workings of a business in which dolphins that are caught for entertainment purposes go for up to $150,000. (The ones that end up in the marketplace for consumption, meanwhile, are chock-full of hazardous mercury.)

The irony in all this, of course, is that O'Barry made his name capturing and training the dolphins who starred in the 1960s TV series "Flipper"; now, after forging an emotional bond with these creatures - he believes Kathy, the original Flipper, committed suicide in his arms - he's a vocal force urging that they be released back to the ocean.

(Early on in the film, O'Barry is asked, "How many times have you been arrested?" Without missing a beat, he responds, "This year?")

Psihoyos' film is effectively disturbing - he mixes horrifying anecdotes with beautiful footage - but he also aptly compares the plot to access and photograph these hunts to "Ocean's Eleven." One member of the team, who works for George Lucas' Industrial Light & Magic, helped make fake rocks in which to hide high-definition cameras and microphones; another is a former avionics technician who spent seven years in the Canadian Air Force. Through hand-held camerawork and night vision effects, we feel like we're running with the crew, too.

His film isn't exactly balanced, though, with Japanese leaders and international whaling officials categorically coming off as duplicitous. The statistic is repeatedly mentioned that 23,000 dolphins and porpoises are killed annually in Japan, but we're never told the origin of this figure. And Psihoyos offers such a dizzying array of talking heads to make his points, it's often hard to keep track of who does what with the various biological and oceanic agencies.

But the last 10 minutes or so are a doozy - difficult to watch for their graphic violence, frustrating in the sense of helplessness they inspire. Psihoyos and Co. do offer some glimmers of hope in the epilogue as to what we can do, though. At the very least, "The Cove" will make you think twice before taking the kids to a marine park to see dolphins do tricks.

"The Cove," a Roadside Attractions release, runs 91 minutes. Three stars out of four.
By Christy Lemire