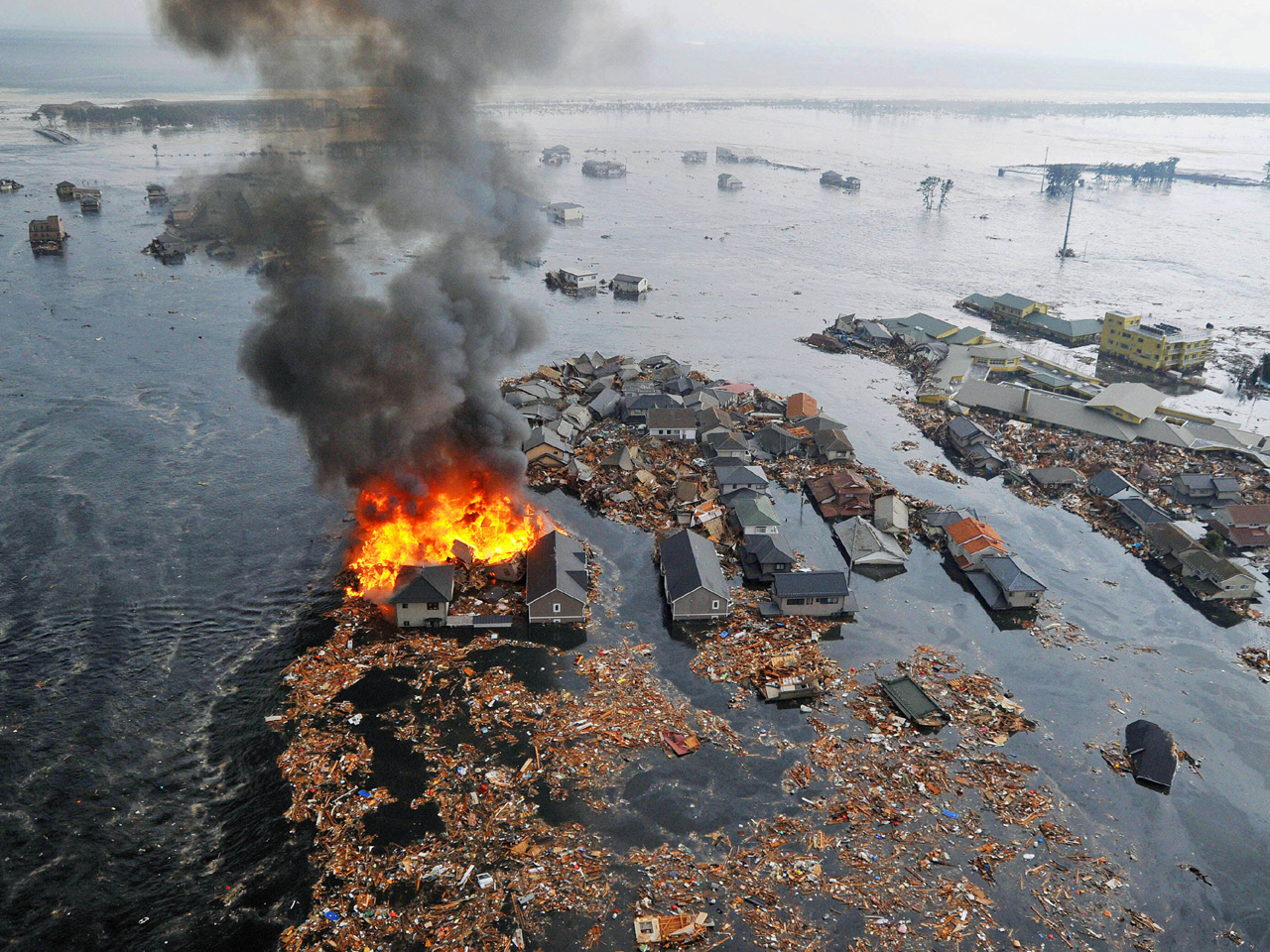 TOKYO - A ferocious tsunami spawned by one of the largest earthquakes ever recorded slammed Japan's eastern coast Friday, killing hundreds as it swept away boats, cars and homes while widespread fires burned out of control. Tsunami warnings blanketed the entire Pacific, as far away as South America, Canada, Alaska and the entire U.S. West Coast.

The magnitude 8.9 offshore quake unleashed a 23-foot tsunami and was followed by more than 50 aftershocks for hours, many of them of more than magnitude 6.0.

Japanese police say 200 to 300 bodies were found in Sendai, the closest major city to the epicenter. Earlier, police confirmed at least 60 people had been killed and 56 were missing. The death toll was likely to continue climbing given the scale of Friday's disaster; extensive search and rescue efforts were still just getting underway.

A Japanese coast guard official said a search is under way for a ship carrying 80 dock workers that was swept away by the tsunami. The vessel was washed away from a shipbuilding site in Miyagi prefecture, close to the earthquake's epicenter.

Dozens of cities and villages along a 1,300-mile stretch of coastline were shaken by violent tremors that reached as far away as Tokyo, hundreds of miles from the epicenter.

The International Atomic Energy Agency said Japan had closed four nuclear power plants as a precaution. A state of emergency was declared at one of the plants after its cooling system had a mechanical failure. Thousands of residents around the plant were ordered to evacuate. Trouble was reported at two other nuclear plants as well, but there was no radiation leak at any.

Chief Cabinet Secretary Yukio Edano said the emergency measure at the nuclear power plant in Fukushima was a precaution and that the facility was not in immediate danger.

Even for a country used to earthquakes, this one was of horrific proportions because of the tsunami that crashed ashore, swallowing everything in its path as it surged several miles inland before retreating. The apocalyptic images of surging water broadcast by Japanese TV networks resembled scenes from a Hollywood disaster movie.

Large fishing boats and other sea vessels rode high waves into the cities, slamming against overpasses or scraping under them and snapping power lines along the way. Upturned and partially submerged vehicles were seen bobbing in the water. Ships anchored in ports crashed against each other.

The highways to the worst-hit coastal areas were severely damaged and communications, including telephone lines, were snapped. Train services in northeastern Japan and in Tokyo, which normally serve 10 million people a day, were also suspended, leaving untold numbers stranded in stations or roaming the streets. Tokyo's Narita airport was closed indefinitely.

The quake was the strongest ever recorded in the highly seismically active archipelago, Japan's meteorological agency said. The 1923 Great Kanto Earthquake in Tokyo and its vicinity, which killed more than 140,000 people, registered 7.9.

The most serious earthquake of the past several decades struck near Kobe in January 1995, killing more than 6,000 people and measured only a 6.8.

Japan has strict urban building codes requiring buildings to withstand even the most massive quakes and has prepared extensively for major earthquakes like Friday's. But the toll of any quake -- in damage and in lives -- is unpredictable, depending on timing, location and the presence of older buildings that don't meet modern earthquake standards, among other factors.

Matt Alt, an American living in Tokyo, told "The Early Show" on Friday morning that the quake lasted less than a minute, "but it felt a lot longer than that."

Alt and his wife rushed out of their home as the temblor struck. "The undulation of the Earth was so powerful we had to hang onto the outside of our house," he told CBS News. "This was nothing like I've ever experienced."

Adam Ezard, a British expatriate, said he and his colleagues rushed out of their office building with each powerful aftershock. Ezard and other witnesses said telephone lines were down or overloaded and attempts to reach loved ones were unsuccessful.

Jesse Johnson, a native of the U.S. state of Nevada, who lives in Chiba, north of Tokyo, was eating at a sushi restaurant with his wife when the quake hit.

"At first it didn't feel unusual, but then it went on and on. So I got myself and my wife under the table," he told The Associated Press. "I've lived in Japan for 10 years and I've never felt anything like this before. The aftershocks keep coming. It's gotten to the point where I don't know whether it's me shaking or an earthquake."

Waves of muddy waters flowed over farmland near the city of Sendai, carrying buildings, some on fire, inland as cars attempted to drive away. Sendai airport, north of Tokyo, was inundated with cars, trucks, buses and thick mud deposited over its runways. Fires spread through a section of the city, public broadcaster NHK reported.

The tsunami roared over embankments, washing anything in its path inland before reversing directions and carrying the cars, homes and other debris out to sea. Flames shot from some of the houses, probably because of burst gas pipes.

"Our initial assessment indicates that there has already been enormous damage," Edano said. "We will make maximum relief effort based on that assessment."

He said the Defense Ministry was sending troops to the quake-hit region. A utility aircraft and several helicopters were on the way.

A large fire erupted at the Cosmo oil refinery in Ichihara city in Chiba prefecture and burned out of control with 100-foot-high flames whipping into the sky.

From northeastern Japan's Miyagi prefecture, NHK showed footage of a large ship being swept away and ramming directly into a breakwater in Kesennuma city.

NHK said more than 4 million buildings were without power in Tokyo and its suburbs.

Also in Miyagi, a fire broke out in a turbine building of a nuclear power plant. Smoke was observed coming out of the building, which is separate from the plant's reactor, and the cause is under investigation, said Tohoku Electric Power Co. the company said.

A reactor area of a nearby plant was leaking water, the company said. But it was unclear if the leak was caused by tsunami water or something else. There were no reports of radioactive leaks at any of Japan's nuclear plants.

The U.S. Geological Survey said the 2:46 p.m. quake was a magnitude 8.9, the biggest earthquake to hit Japan since officials began keeping records in the late 1800s, and one of the biggest ever recorded in the world.

The quake struck at a depth of six miles, about 80 miles off the eastern coast, the agency said. The area is 240 miles northeast of Tokyo.

A tsunami warning was extended to a number of Pacific, Southeast Asian and Latin American nations, including Japan, Russia, Indonesia, New Zealand and Chile. In the Philippines, authorities ordered an evacuation of coastal communities, but no unusual waves were reported.

Thousands of people fled their homes in Indonesia after officials warned of a tsunami up to 6 feet high. But waves of only 4 inches were measured. No big waves came to the Northern Mariana Islands, a U.S. territory, either.

The first waves were expected to hit Hawaii about 1400 GMT (9 a.m. EST) Friday, and could reach more than 6 feet, the Pacific Tsunami Warning Center said.

In downtown Tokyo, large buildings shook violently and workers poured into the street for safety. TV footage showed a large building on fire and bellowing smoke in the Odaiba district of Tokyo. The tremor bent the upper tip of the iconic Tokyo Tower, a 1,093-foot steel structure inspired by the Eiffel Tower in Paris.

Osamu Akiya, 46, was working in Tokyo at his office in a trading company when the quake hit.

It sent bookshelves and computers crashing to the floor, and cracks appeared in the walls.

"I've been through many earthquakes, but I've never felt anything like this," he said. "I don't know if we'll be able to get home tonight."

Footage on NHK from their Sendai office showed employees stumbling around and books and papers crashing from desks. It also showed a glass shelter at a bus stop in Tokyo completely smashed by the quake and a weeping woman nearby being comforted by another woman.

Several quakes had hit the same region in recent days, including a 7.3 magnitude one on Wednesday that caused no damage.

Hiroshi Sato, a disaster management official in northern Iwate prefecture, said officials were having trouble getting an overall picture of the destruction.

"We don't even know the extent of damage. Roads were badly damaged and cut off as tsunami washed away debris, cars and many other things," he said.

Dozens of fires were reported in northern prefectures of Fukushima, Sendai, Iwate and Ibaraki. Collapsed homes and landslides were also reported in Miyagi.

Japan lies on the "Ring of Fire" - an arc of earthquake and volcanic zones stretching around the Pacific where about 90 percent of the world's quakes occur, including the one that triggered the Dec. 26, 2004, Indian Ocean tsunami that killed an estimated 230,000 people in 12 nations. A magnitude-8.8 temblor that shook central Chile last February also generated a tsunami and killed 524 people.