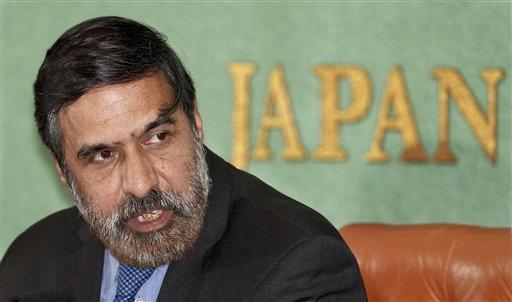 TOKYO (AP) - Japan and India signed a free trade agreement Wednesday amid a push by Japan to revive its weak economy by lowering barriers to trade and deepening its economic ties with the fast-growing nations of emerging Asia.

Forging this kind of pact is increasingly a priority for Japan, which sees itself falling behind regional rival South Korea in the area of free trade agreements. With Japan's population shrinking and its economic stuck in a two-decade slump, Prime Minister Naoto Kan has declared that Japan needs to "open up" to revive its prospects.

Sharma called the agreement "historic and significant," highlighting how emerging economies such as India and China are reshaping the global economy.

Despite both being big economies, Japan and India have limited trade, totaling 1.267 trillion yen, or about $15 billion, in 2010 - just 1 percent of Japan's global trade. By comparison, Japan's annual trade with China exceeds 26.4 trillion yen, or $317 billion.

Sharma told Maehara he hoped the pact would double trade volume between the nations within 3-4 years, according to the Ministry of Foreign Affairs.

The pact still needs ratification by Japan's parliament to come into force, but India does not require the approval of its legislative body.

Under the agreement, Japan will within 10 years remove tariffs on 97 percent of Indian imports, with India eliminating tariffs on 90 percent of goods imported from Japan.

Japan will allow greater market access on most products in the industrial sector, as well as agricultural products such as curry, tea leaves, lumber and shrimp.

India in turn will cut tariffs on Japanese imports ranging from car mufflers and steel sheets to DVD players and video cameras, as well as peaches, strawberries and Japanese yams.

The two countries also agreed to enter negotiations over allowing into Japan nurses and other certified careworkers from India, aiming to conclude talks within two years after the economic partnership agreement becomes effective.

Kan's government is considering whether to join a broad free trade zone that nine Pacific Rim countries, including the U.S. and Australia, are negotiating called the Trans-Pacific Partnership. Tokyo plans to announce a decision on that in June.