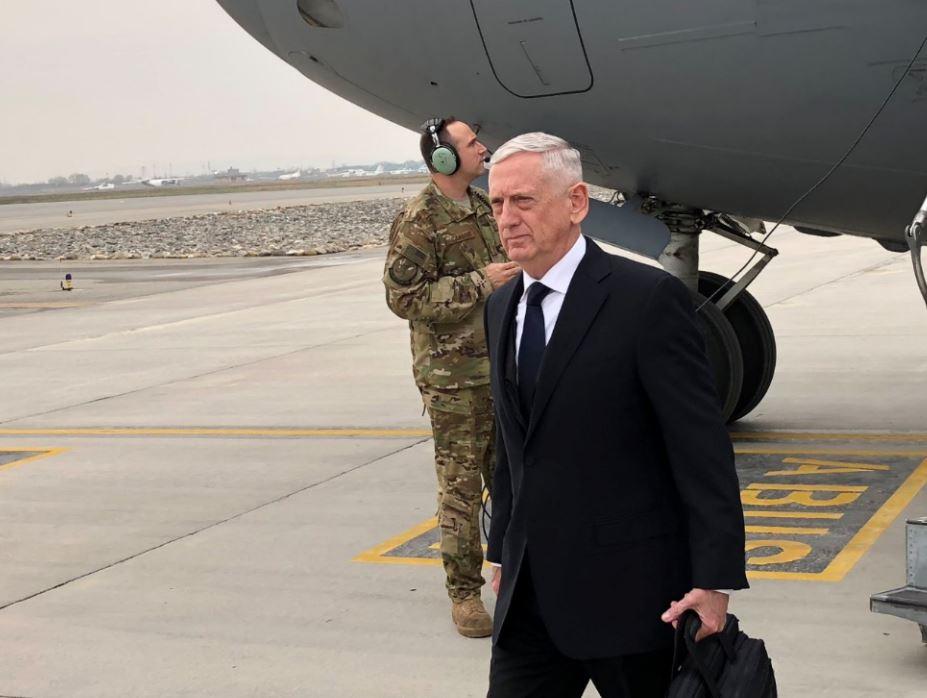 KABUL, Afghanistan -- U.S. Defense Secretary Jim Mattis said Tuesday he believes victory in Afghanistan is still possible -- not necessarily on the battlefield but in facilitating a Taliban reconciliation with the Afghan government. Mattis spoke shortly before arriving in Kabul, where security concerns were so high that reporters traveling with him weren't allowed to publish stories until his party had moved from the Kabul airport to the U.S.-led military coalition's headquarters. That was the first such restriction on coverage of a Pentagon chief's visit in memory.

Mattis said he would be meeting with President Ashraf Ghani and top U.S. commanders.

"We do look toward a victory in Afghanistan," he said, adding, "not a military victory -- the victory will be a political reconciliation" with the Taliban, which has achieved a stalemate in recent years and shown little interest in conceding to the Kabul government.

Mattis, a retired Marine general who commanded U.S. troops in southern Afghanistan in the opening weeks of the war in 2001, said getting the Taliban to reconcile en masse may be "a bridge too far" -- so the emphasis is on drawing in Taliban elements piecemeal.

He described this approach as an effort to "start peeling off those who are tired of fighting," after more than 16 years of war.

"We know there is interest on the Taliban side," he said.

He defined victory in Afghanistan as a political settlement between the Taliban and the government, and an Afghan military that is capable of securing the country largely on its own. At that point, he said, Afghanistan would not be "a haven for attacks internationally" as it was when al Qaeda used the country as a launching pad for the attacks of Sept. 11, 2001.

Ghani proposed talks with no preconditions with the Taliban last month, in what the Reuters news agency says "was seen by U.S. officials as a major overture from Kabul."

U.S. intelligence officials are predicting the war will remain stalemated as the traditionally most intensive fighting season begins this spring.

The visit is Mattis's second since President Trump announced last August that, despite his instinct to pull U.S. troops out of Afghanistan, his administration would take a more aggressive approach to the conflict, now in its 17th year.

As part of an effort to bolster Afghan fighting strength, the U.S. in recent weeks sent an Army group of about 800 soldiers, accompanied by several hundred support troops, to advise the Afghans closer to the front lines. The U.S. also shifted A-10 attack planes and other aircraft from striking Islamic State of Iraq and Syria (ISIS) militants in Syria and Iraq to Afghanistan as part of Mr. Trump's new approach. These and other moves boosted the number of U.S. troops in Afghanistan by at least 3,500, to a total of more than 14,000.

Mattis has said that the U.S. goal is to enable Afghan forces to weaken the Taliban to the point where the Afghans can manage their own security. Put another way -- the aim is to convince the insurgents they cannot win on the battlefield, thus driving them to reconcile with the Afghan government.

Stephen Biddle, a George Washington University political science professor and longtime observer of the Afghan conflict, is skeptical that the new U.S. strategy will make a decisive difference militarily, although he sees "glimmers of hope" for progress toward a peace settlement. He noted that both the Taliban and Afghan President Ashraf Ghani have spoken recently of pushing for reconciliation. In late February, Ghani called on the Taliban to take part in peace talks to "save the country," offering security and incentives such as passports to insurgents who are willing to join the negotiations.

Alice Wells, the State Department's top official for South and Central Asian Affairs, said Friday at the United States Institute for Peace that Ghani's approach is more accommodating toward the Taliban than previous overtures by Kabul and deserves a thoughtful response from the Taliban.

Mr. Trump, however, said on Jan. 29 that he sees no basis for peace talks as long as the Taliban are "killing people left and right."

The Taliban stance is that talks for a conflict-ending compromise must take place with Washington, not Kabul.

U.S. officials have conveyed messages to Taliban political representatives in Qatar urging the group to negotiate with the Afghan government. Neighboring countries are doubtful about America's commitment to a political resolution. Pakistan, Iran and Russia are thought to maintain ties to militant proxies inside Afghanistan in case the war-ravaged country collapses.

On the military front, U.S. officials assert that years of effort to build a credible and effective Afghan army and air force are beginning to pay off. At the same time, it has become harder to gauge such progress because the American-led military coalition has stopped releasing information such as the size of the Afghan army and rates of attrition in its ranks. The number of Afghan combat deaths also is withheld by the Afghan government.

In testimony before the Senate Armed Services Committee late last month, Gen. Joseph Votel, the head of U.S. Central Command, said the Afghan security forces are getting better. He said they do not, however, have the ability to "prevent the insurgency from maintaining a rural presence and occasionally threatening a population center" or important roadway.

In Votel's view, the greatest risk to stability in Afghanistan is the Kabul government's "uncertain political situation" as it prepares for planned July 2018 parliamentary elections.

Gen. Curtis Scaparrotti, the head of U.S. European Command, told a congressional panel on March 8, just days after visiting Afghanistan, that the Army's newly deployed brigade of advisers are expected to provide "a great boost for the mission" by operating more widely and closer to the front lines.

U.S. intelligence agencies are taking a less optimistic view of the war's likely path in 2018.

"We assess the overall security picture will ... modestly deteriorate in the coming year and Kabul will continue to bear the brunt of the Taliban-led insurgency," Dan Coats, the director of national intelligence, told a Senate committee on March 6. Afghan forces, while "unsteady," probably will maintain control of most major population centers in 2018, he added.

In a late-February report, the Pentagon's special inspector general for Afghanistan reported that the Afghan government's control of the country is at its lowest recorded level since the end of 2015 and that Taliban control it at its highest.