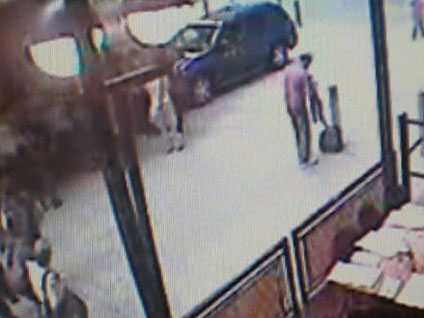 In "Shark Tale," Dreamworks' new computer-animated undersea adventure, actor Jack Black has found a role he can sink his teeth into.

The funnyman provides the voice of Lenny, a shark who just doesn't fit in with his Mafia-style family. Lenny is a vegetarian in a carnivorous world.

"I did a little research and I'm unrecognizable apparently," Black tells The Early Show co-anchor Julie Chen, about his role in the movie that opens Oct. 1. "No one knows it's me."

Black is part of all-star cast: Will Smith, Martin Scorsese, Angelina Jolie, and as the mob boss, Robert DeNiro. The cartoon characters are drawn to resemble the actor playing their voices.

"They've captured my essence with the character of Lenny," says Black. "I think they went overboard with the potbelly."

How did he earn a spot in such company? Black's breakout performance as a frustrated musician in "School of Rock" earned him the attention of a wide audience and a Golden Globe nomination. The role was written with Black in mind and has parallels to his real life.

Black says he's planning his own rock film named after his band, Tenacious D. "It's kind of like 'Lord of the Rings,' actually," he tells Chen. "We would be on quest to become the greatest band on earth."

Black readily reveals that brains, not music, runs in his family. His parents are both rocket scientists.

"I don't even understand what they did. I just know they were working on satellites somehow, with their brains," he says. "They're very good at math."

Did they want him to follow in their footsteps?

"Luckily, they never put pressure on me to do that because I just didn't have the smarts for it. All my brain powers are just rock. They're rock-et science; I'm just rock science."

Black likes the role of Lenny in "Shark Tale" because it's different from parts he always has played.

"Usually all the characters that I've done in movies are just me basically. And this time, I actually delved into a strange different character," he says.

And Black's career appears to be moving up in the Hollywood food chain. He's been cast in Peter Jackson's remake of "King Kong."

Some Facts About Jack Black