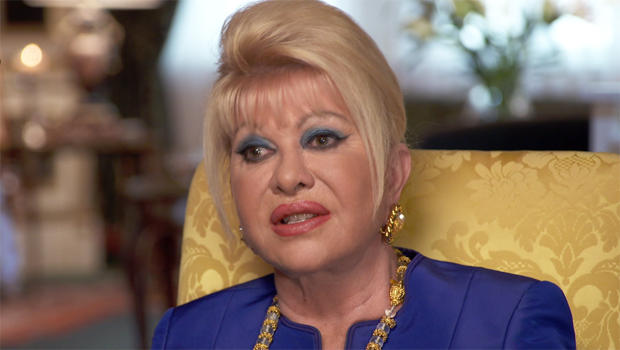 Time for some questions for Ivana Trump, the first wife of President Trump, mother of his three oldest children, and author of a new book published by an imprint of Simon and Schuster, a part of CBS. Jim Axelrod met up with her on her home turf:

After all these years, Ivana Trump, walking her toy Yorkie in her leopard-print coat on the tony East Side of New York, still evokes the lifestyles of the rich, if not quite as famous.

But at 68 -- more than a quarter-century after her marriage to Donald Trump broke up -- Ivana says she doesn't miss a thing.

Axelrod asked, "Do you miss the old life? Life with Donald?"

"I don't. No," she replied. "Nothing really change. I have a beautiful home here. I have a spectacular apartment in Miami. I have a 300-year-old fisherman houses in harbor of Saint Tropez. What more can I have?"

Still, as satisfied as she is with all she has, she wants to make something perfectly clear:

The Sex Change Capital of The U.S.

"'He wouldn't be who he is without you?" Axelrod said.

"That's for sure," Ivana replied.

Especially when it comes to their children. She's written a new book, "Raising Trump," inspired, she says, by watching her three kids (Don. Jr., Ivanka and Eric) during the campaign.

"I was very, very proud of them," she said, "because they were articulate, intelligent."

"And so you thought, 'Wait a minute, if we're gonna talk about who raised the Trump kids --?" Axelrod asked.

"It was definitely me."

"Raising Trump" includes stories many parents can relate to, as when 14-year-old Ivanka came home with her hair colored blue. "So I freaked," Ivana said.

And a few stories most parents certainly cannot. "I was in first class, and kids were in the economy," she recalled.

"And were they learning a lesson that way?"

"Well, I think so. Ivanka wanted to have an upgrade one day. I said, 'When you can afford it, you get upgrade. I'm sitting in first class. I afford it. You're sitting in economy.'"

It's been 41 years since Ivana, a model from what's now the Czech Republic, got a life-changing tap on the shoulder in a New York City nightspot.

"So I turn around. And there is a blond, blue-eyed guy. And he said, 'I'm so sorry. I'm so sorry. My name is Donald Trump. And I can see the girls, you are looking for a table.'

"And I turned to my girlfriend. I said, 'I have good news and bad news.' 'What is the good news?' 'We're going to get a table real fast.'

"'What is the bad news?' 'This fellow behind me is going to go and sit with us!'"

They would marry eight months later in 1977, and become the boldest of New York City's bold-faced names in the 1980s.

The spotlight could be harsh.

Donald Trump: "We should have world record-setting fights, but we really don't. There's not a lot of disagreement, because ultimately Ivana does exactly as I tell her to do."

Axelrod said, "You're still laughing. But you heard the audience, a lot of groans."

"Did you feel that was disrespectful?"

"Maybe it was. You know, but it didn't bother me."

Of Marla, Ivana said, "I don't talk about her. She's a showgirl. Never achieve anything in her life."

Today she won't even call Maples by name. It may take two to tango, but only one could be blamed.

"In the book she gets the blame," Axelrod said.

"Do you blame him when you think about it now?"

Though the terms of her divorce were sealed, Ivana Trump clearly walked away from her marriage with enough to cushion the pain. And if she'll never forgive his second wife, she has no issues with President Trump's third.

She said she gets along with Melania Trump. And what is the difference? "One is nobody. And the other one is First Lady."

Maybe it's not divorce as many have lived it, but as she's proven for the last three-plus decades, Ivana doesn't do "common."

In her book she writes: "My instincts tell me Donald was smart and funny and an all-American good guy."

Axelrod asked, "Were your instincts right?"

"You still feel that way about him?"

When asked if the president is still a big part of her life, she replied, "Yeah, he is. He is. We speak to each other."

How often? "Yeah, maybe once a week. He's still asking for advice, yes."

"What will he ask you your advice about?" Axelrod asked.

"He ask me about, 'Should I tweet? Should I not tweet?' I said, 'I think you should tweet. It's a new way, a new technology. And if you want to get your words across rightly, without telling The New York Times, which is going to twist every single word of yours, this is how you get your message out.'"

"Well, it's a tweeting president," Ivana responded. "This is his new way, how to put the message across. And he's right."

"Do you think it bothers him that the polls suggest that there are more people that disapprove than approve?"

After all, that's his life now, not hers. She moved on to selling several lines of Ivana-branded products and books. She married and divorced twice after Donald, and doesn't mind letting you know she's still not hurting for company.

She admits, for one, that she likes the energy of younger men. "Yes. Yes, I rather be a babysitter than a nursemaid!" she laughed. "And I don't need to worry about the bad knee and bad back and Viagra and all that stuff."

No, Ivana Trump likes her life just fine -- her new one, which is a lot like the old one, without the complications

She explained, "I was just offered to be American ambassador to Czech Republic. Donald told me. He said, 'Ivana, if you want it, I give it to you.' But I like my freedom. Why would I go and say bye-bye to Miami in the winter, bye-bye to Saint-Tropez in the summer, and bye-bye to spring and fall in New York? I have a perfect life."