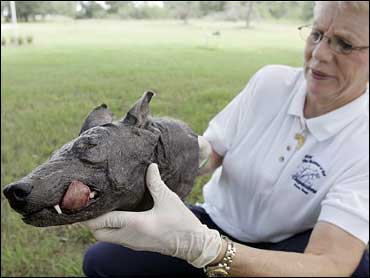 The results are in: The ugly, big-eared animal found this summer in southern Texas is not the mythical, bloodsucking chupacabra. It's just a plain old coyote.

CBS affiliate KENS-TV of San Antonio provided a tissue sample from the animal for testing.

"The DNA sequence is a virtually identical match to DNA from the coyote," biologist Mike Forstner said in a statement. "This is probably the answer a lot of folks thought might be the outcome. I, myself, really thought it was a domestic dog, but the Cuero Chupacabra is a Texas Coyote."

Phylis Canion and some of her neighbors discovered the 40-pound bodies of three of the animals over four days in July on a road outside her ranch in Cuero, 90 miles southeast of San Antonio.

Canion told KENS that her ranch had been pestered for years by the creature that stole her cats and sucked her chickens dry.

Canion said she saved the head of the one she found so she could get to the bottom of its ancestry through DNA testing and then mount it for posterity.

Chupacabra means "goat sucker" in Spanish, and it is said to have originated in Puerto Rico and Mexico. Its place in folklore is similar to that of Bigfoot or the bogeyman, except it has an appetite for the blood of farm animals, such as goats and chickens.

Additional skin samples have been taken to try to determine the cause of the animal's hair loss, Forstner said.

The mystery garnered worldwide attention, even as far away as Saudi Arabia, KENS reports. Students wore T-shirts with pictures of the creature by the hundreds for Chupacabra Day last month at Cuero High School.