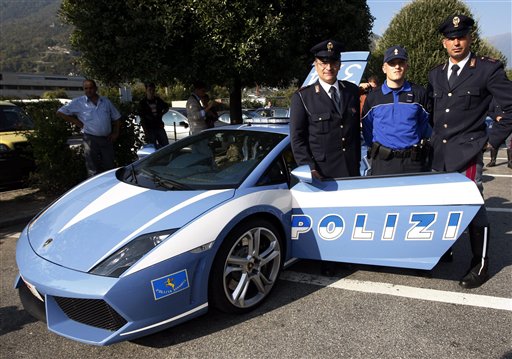 The Dutch are about to learn how Italian police catch speeders.

A Lamborghini police car with a top speed of 202 mph (325 kilometers per hour) was en route Thursday _ presumably within the speed limits _ from Italy to the eastern Dutch city of Ewijk to be the top attraction at a display of Dutch emergency services.

The car is equipped with the latest gadgetry, such as a medical platform under the hood that contains a cold box for transferring human donor organs and a camera up front to record GPS data.

The car was one of several that has been donated by its builders to Italian police. The 2008 model updated two cars Italian police received in 2004.

Some experts say the Lamborghini is the fastest police car in service, but one Web site, http://www.gizmag.com, claims a police vehicle from Germany's Brabus Rocket, an upgraded Mercedes-Benz, clocked 226 mph (362 kph ) at the 2006 Essen Motor Show.