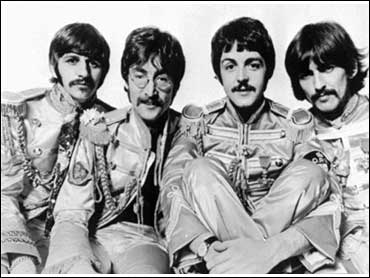 The Kaiser Chiefs, Razorlight, the Fray and other popular rock groups have joined to record songs from "Sgt. Pepper's Lonely Hearts Club Band" in honor of Friday's 40th anniversary of the Beatles' epochal album.

During the special recording session, which airs on BBC Radio 2 on Saturday, musicians and audio engineer Geoff Emerick will work with the same equipment the Beatles used for their album.

"From a recording point of view, people have forgotten how
groundbreaking it was given the recording technology at the time," said Jo Phillips, director of 10 Alps, the company commissioned to create the documentary. "Production capabilities were so limited. So much was up to the imagination of the producers."

It was the first British album done with eight-track recording, running a pair of four-track machines in synch.

Arriving on a wave of psychedelia in the so-called Summer of Love, the album was meant to be played and experienced from start to finish—an innovative concept at the time.

The band had tired of touring by the late 1960s -- they had played their last live concert in San Francisco on Aug. 29, 1966 -- and spent their time recording novel technical elements into the music, ushering in a new era both in their own music and in rock 'n' roll as a whole.

One music critic called the album "a decisive moment in the history of Western civilization."

Sgt. Pepper's Lonely Hearts Club Band was treated as a real band, and the album cover art, designed by Peter Blake, shows the group presiding over the funeral of the Beatles surrounded by a congregation of pictures of famous figures such as Marlon Brando, Aldous Huxley, Oscar Wilde, Marilyn Monroe, Bob Dylan and Karl Marx.

In 1968, "Sgt. Pepper" was the first pop album to win the Grammy award for album of the year. It also won best contemporary album.

Rolling Stone magazine placed the album in the No. 1 slot on their list of the 500 best albums of all time. Within weeks of its release, Jimi Hendrix was performing the title track in concert.