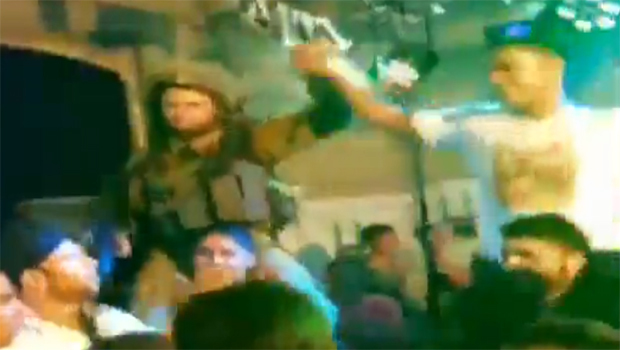 JERUSALEM A group of Israeli soldiers has danced up a storm of criticism after they were filmed boogying alongside Palestinians while on patrol in the West Bank.

The soldiers were making the rounds in the city of Hebron when they entered a dance hall and joined dozens of Palestinian men dancing to the hit "Gangnam Style." The Israeli military said Thursday it considers the incident "serious," adding "the soldiers exposed themselves to unnecessary danger and were disciplined accordingly," without elaborating. Israeli newspaper Haaretz notes that ditching a patrol to join the dance floor could be a violation of standing orders.

Footage aired on Israeli Channel 2 TV shows the solders in uniform, flak jackets and carrying guns. One was shown hoisted on the shoulders of Palestinian dancers. Other soldiers joined hands and grooved with the partygoers. The channel said the incident occurred Monday.

The original video has since been taken down from YouTube, where it was first published, but Haaretz reports the cell phone video was posted Tuesday with the title "Israeli soldiers dancing at a Palestinian wedding in Hebron.

Hebron has been a flashpoint of violence between Jews and Palestinians for decades.

The incident has also garnered some defense for the soldiers. An editorial in The Guardian by Seth Freedman argued the soldiers should be praised, not disciplined, for their actions because it does "a great deal for proving to both sides that there is an alternative to constant trepidation and hatred."